Everyone growing up in my hometown of Cresskill has eaten at Hanami. A Japanese and Chinese restaurant right in the middle of town. Till this day, it’s the only non-pizza or bagel place.* They would serve cold or warm sesame noodles that I still dream about. This would always be ordered. It was also a fridge staple at my friend Jess’s house through out all of high school.

Imagine my excitement when I looked up a recipe and realized that the sauce is made with sesame paste… um.. TAHINI. Duhhh. This is when my brain began working. Maybe there is a whole cuisine out there that hasn’t been discovered yet. Japaneli. Or Isranese? Japanese-Israeli fusion cuisine. Fine… the name is terrible. I know. So I settled on Far Middle Eastern… right!?!? My excitement levels peaked when I started searching the web for this culinary movement and stumbled upon Shalom Japan in Brooklyn. Smart.

Now, this tahini udon noodle bowl with charred eggplant is delicious. It’s creamy, nutty, noodle-y… ugh. The thick sauce coats the udon beautifully. It can be eaten warm or room temp which means that this dish can be made ahead. Always a plus. I used dried udon noodles

as opposed to those par-cooked vacuum sealed udon. I like the texture better. Feel free to use any kind of udon you can find. The tahini sauce is made with tahini (obvi), a bit of peanut butter, and soy for added umami. It’s so freaking tasty. I used Middle Eastern tahini paste as opposed to an asian roasted sesame paste. I roast the eggplant to soften the inside and then turn on the broiler to give it a great char and crisp. Brushing them with sesame oil is an extra flavor boost. The cucumber brings a bit of freshness. This is a great meatless meal. Feel free to add chopped peanuts or even chili oil!

Even though this was incredibly tasty, I think this is where my Far Middle Eastern cuisine comes to an end. Maybe… I can’t promise that.

*Not factual. I haven’t actually eaten in Cresskill in more than 8 years. 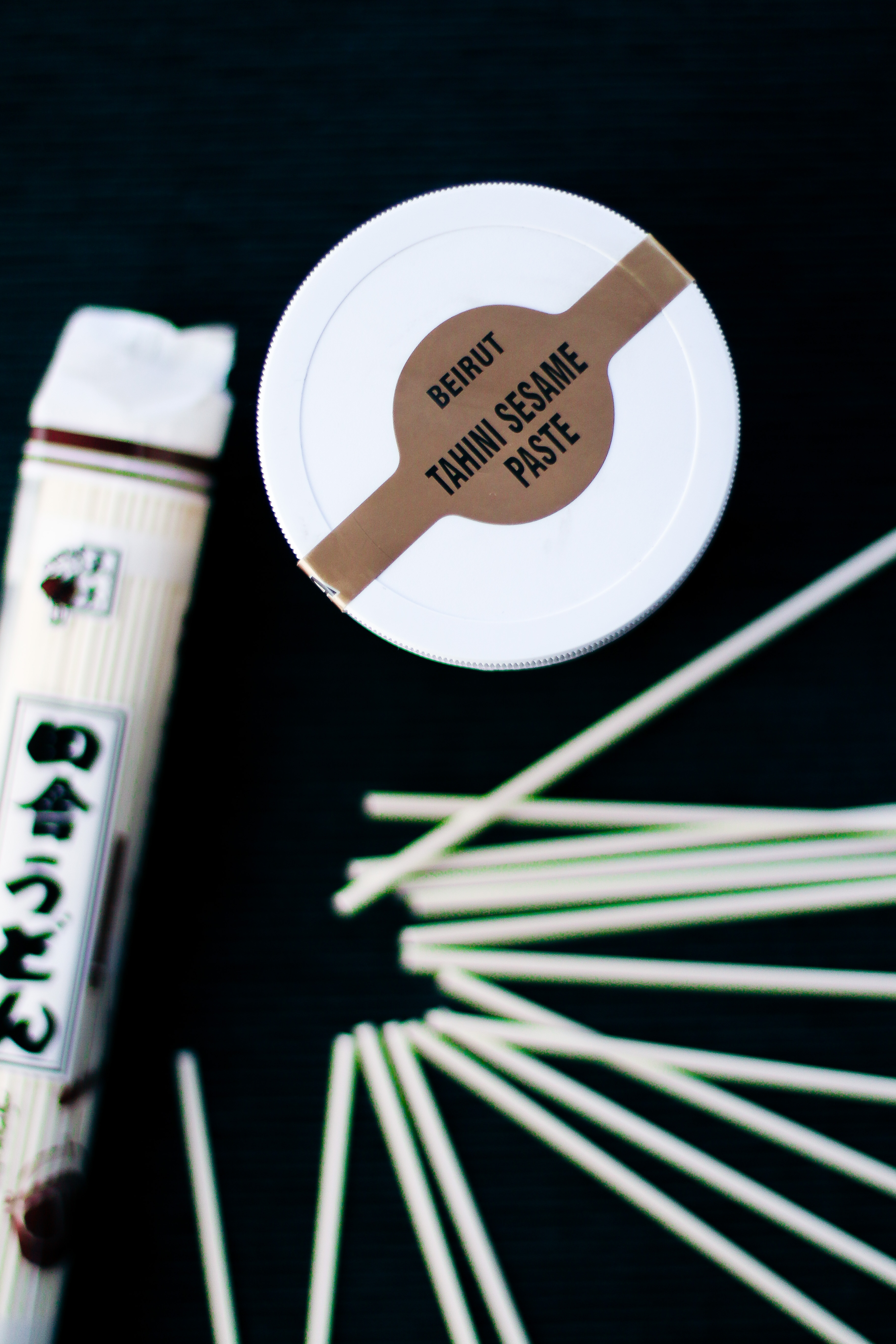 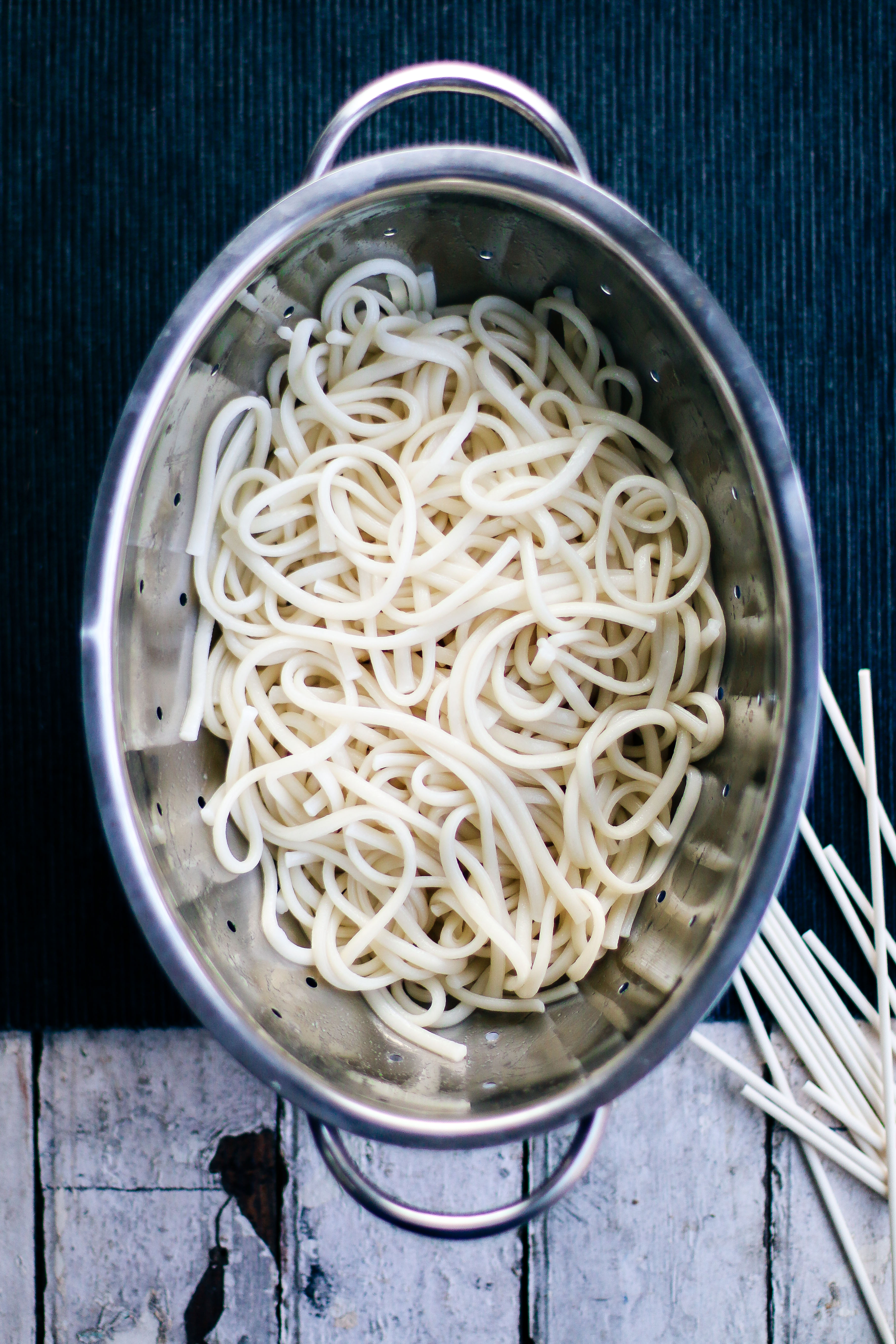 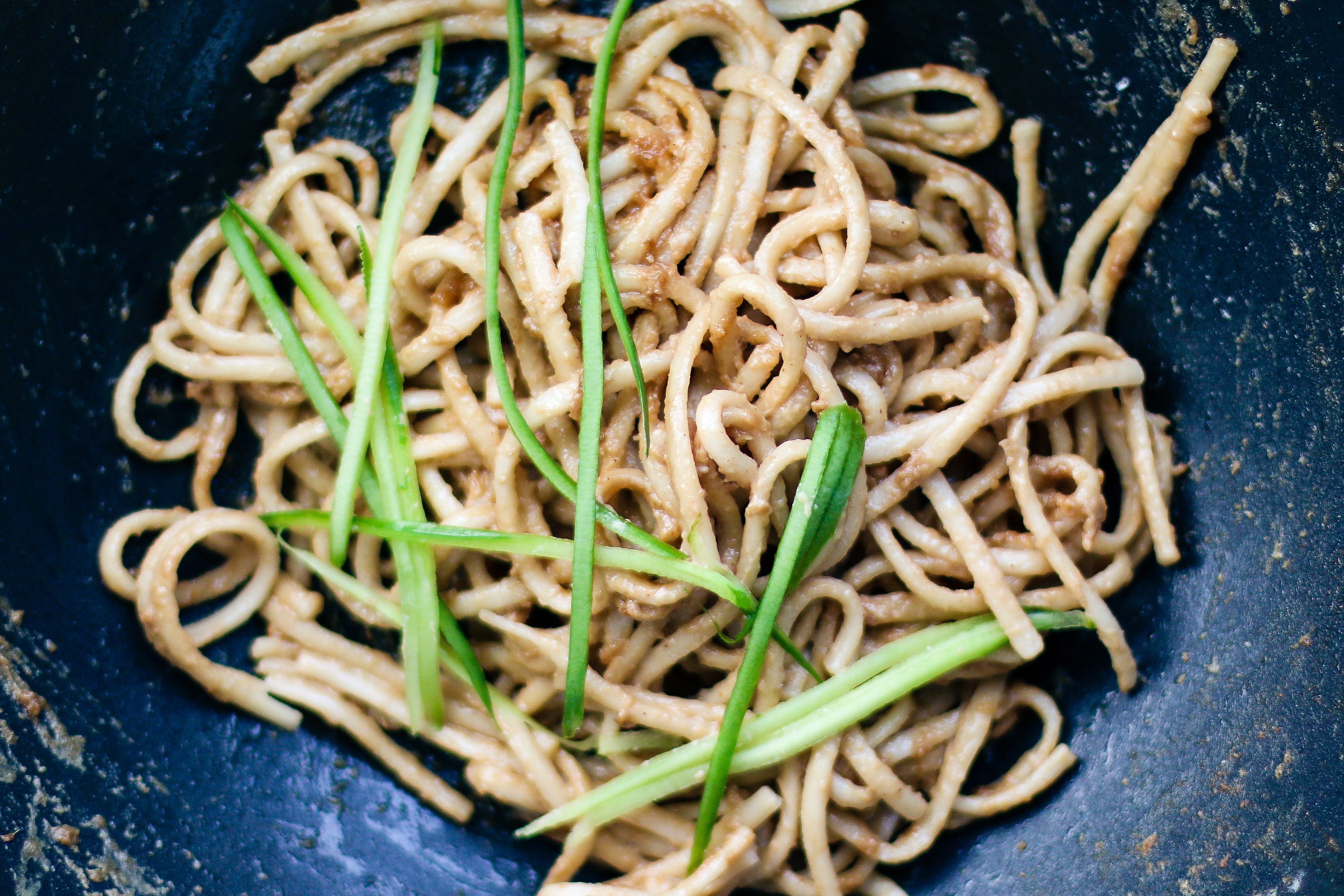 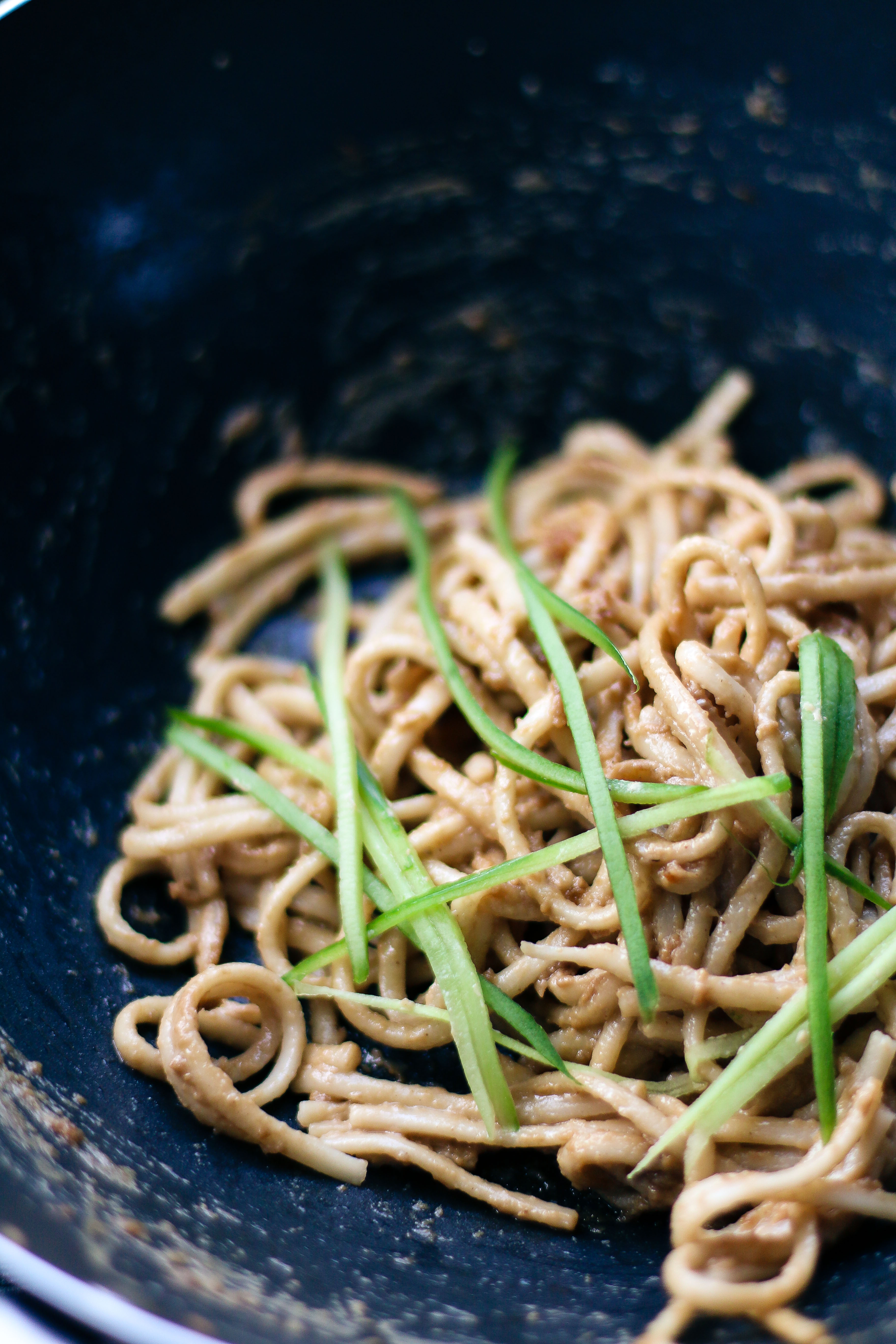 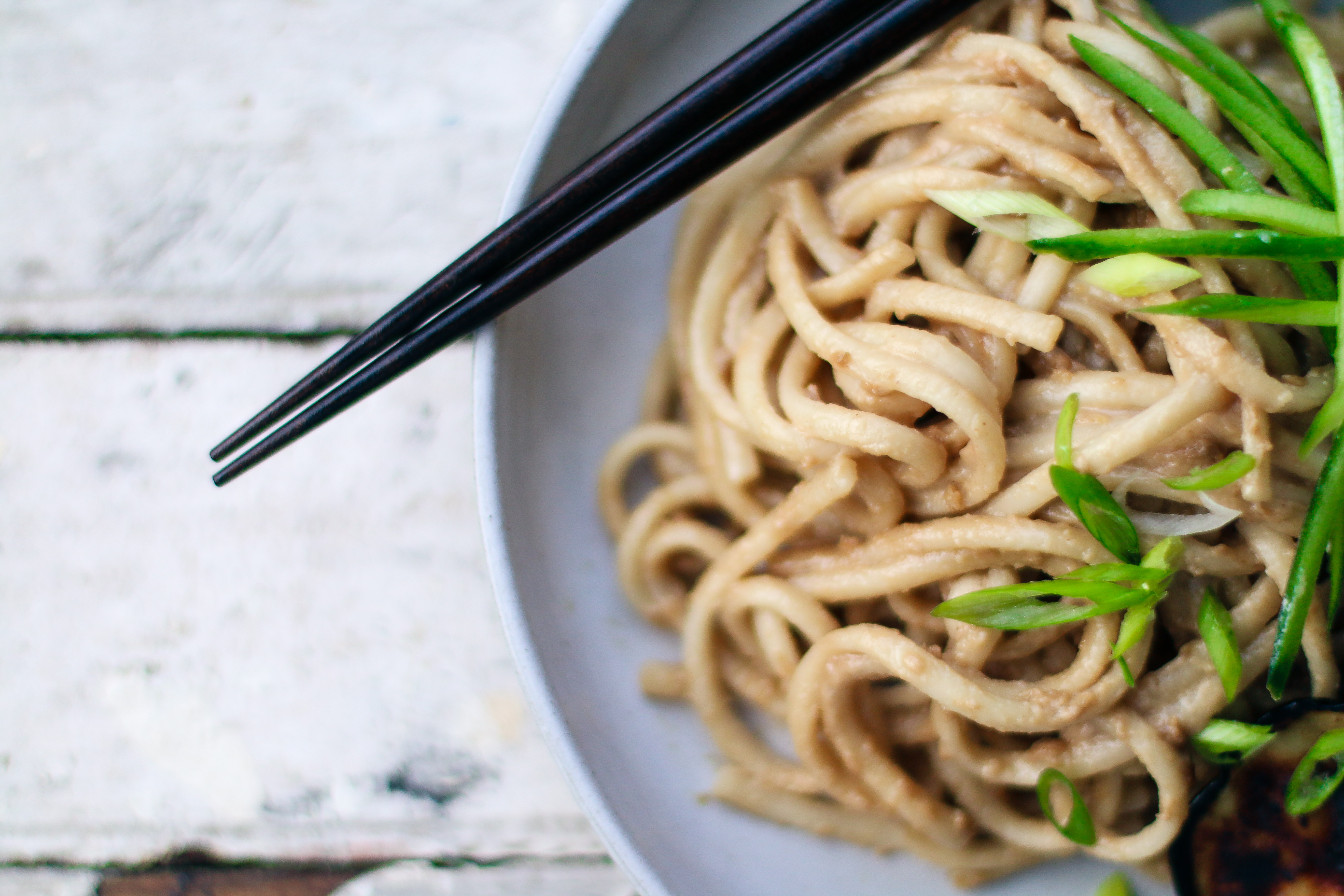 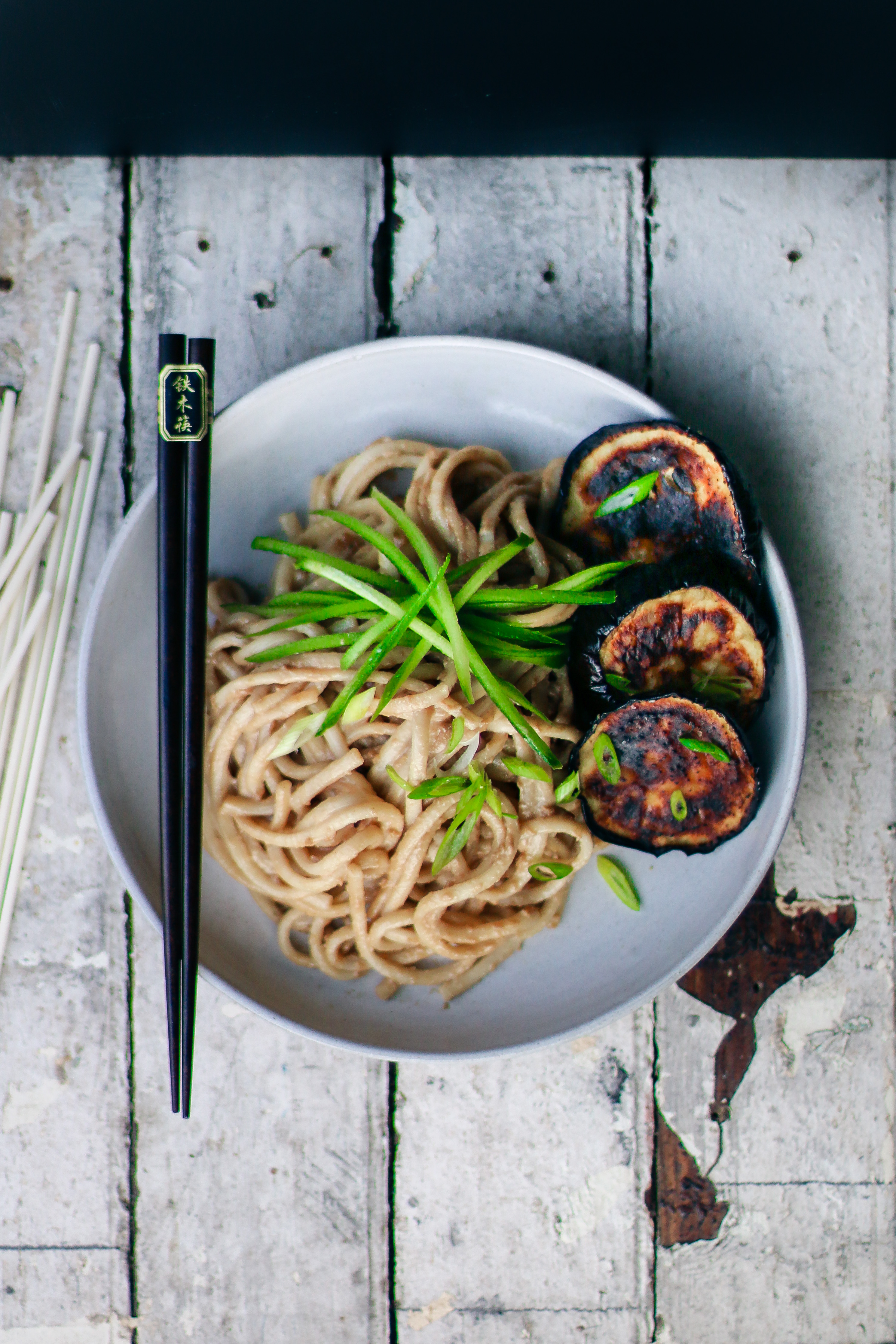 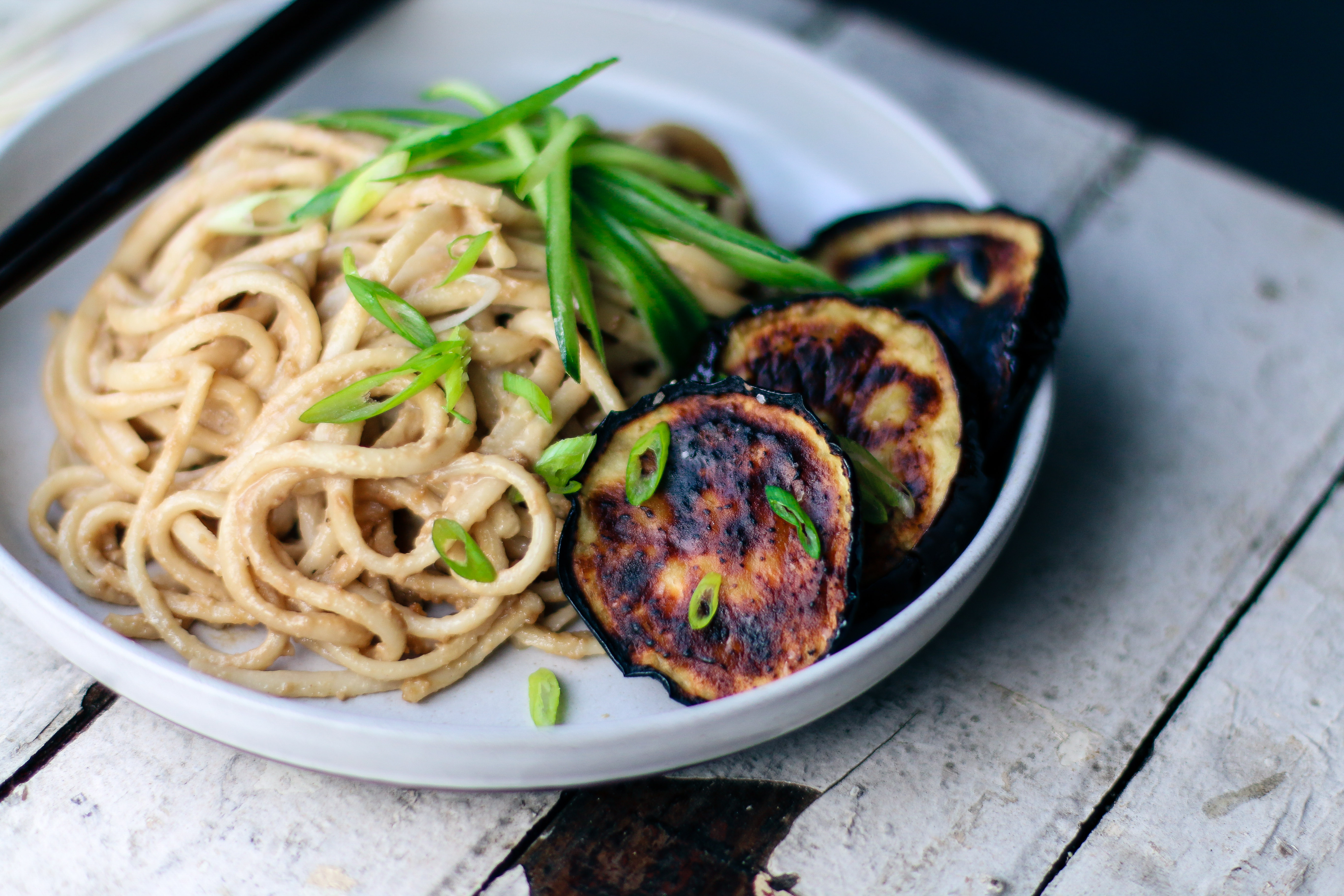 Sprinkle both sides of the eggplant slices with a generous amount of kosher salt and rest on paper towel for 10 minutes. This will remove some of the bitterness of the eggplant. Using a piece of paper towel, dab away any moisture from the eggplant and remove some of the salt. Using a pastry brush, brush on a generous amount of olive oil onto both sides of the slices and place them on the baking sheet. Don’t forget to brush the sides as well. Roast for 15 minutes. Turn your oven up to broil. Char the eggplants for 7-8 minutes turning them over half way through. Keep an eye on them so they don’t turn into coal. Remove from oven and rest them on a cooling rack. This will ensure you keep that nice crisp.

Boil the udon like you would spaghetti. This could take anywhere between 8-10 minutes for dried udon depending on the brand and thickness. Just follow the package instructions or your culinary intuition. As soon as they’re ready, drain in colander, and run cold water over them to stop the cooking.

Combine the tahini, peanut butter, soy sauce, brown sugar, rice vinegar, salt, and 1/3 cup of water in a blender or food processor. Blend until smooth. It will be thick. If it is too thick, add a few more tablespoons of water.

Heat the sesame oil and canola oil over medium-low heat in a large pan or wok. Add the garlic and ginger and cook for 30 seconds until fragrant but not browned. Add the cooked udon and sauce. Toss to warm and coat the noodles. If the sauce seizes, add a bit more water and continue tossing.

Brush a bit of sesame oil onto the eggplant. Plate the noodles and top with the cucumber and scallions. Enjoy! [/one_half_last]