I’ve been in New Jersey working on a menu for a new restaurant that’s opening in the next few weeks. It’s called SCHNITZEL+ and it’s going to be incredible. I had the opportunity to create and design the whole menu.

It’s basically a schnitzel/sandwich joint. There are about eight different kinds of schnitzel and a ton of different sauces that will be slathered all over freshly baked baguettes. I may have gained four pounds “taste testing” said baguettes.

It was amazing, a ton of fun, and exhausting! It was also a challenge. SCHNITZEL+ is a kosher restaurant. So no dairy at all! And no dairy means… no cheese.

Everything that came into the restaurant also needed to be kosher. At first, I was like, “NO PROOOOBLEM!” But as soon as I wanted to make some spicy ketchup with Sriracha, I realized that it was going to be a little tougher than I had thought.

Despite the challenges, I managed to make an exciting and interesting menu. I tested the recipes out on some people who did not keep kosher and they loved it. So, I realized that not every sandwich needs cheese. But, as soon as I was done and back home…

…Ham and cheese happened. The most un-kosher sandwich on the planet. I had to. I needed it. I was craving pig and I was desperate for cheese.

This is a great afternoon snack. Actually, if you are throwing the poached egg on there, then I’d say this makes an amazing brunch dish. It’s almost like a cross between an eggs benedict and a croque madame.

I also got this mustard at St. Lawrence Market in downtown Toronto. There is one stand there named Anton Kozliks that only sells mustards. They have over 30 different types.

One lady at Kozliks is constantly cooking off peameal on this flat top grill. She cuts it up into small cubes and lays it on a tray for you to grab with a toothpick and dip into any one of the mustards they sell. I basically ate lunch at this stand.

It was really tough for me to make a decision on which one I would actually bring home with me. I chose the “triple crunch mustard” and promised myself that I would be back for more. 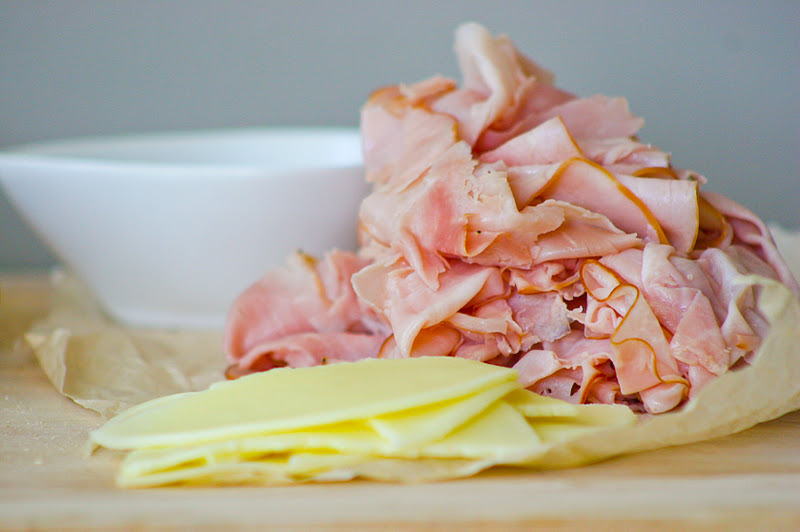 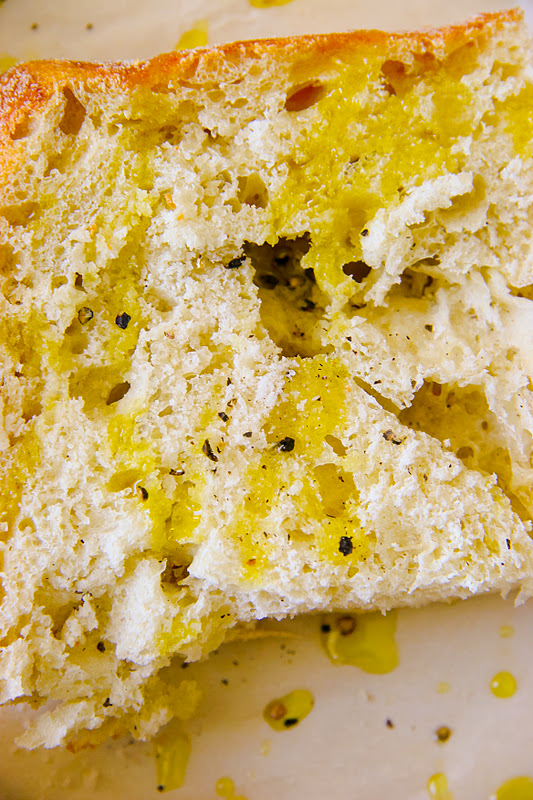 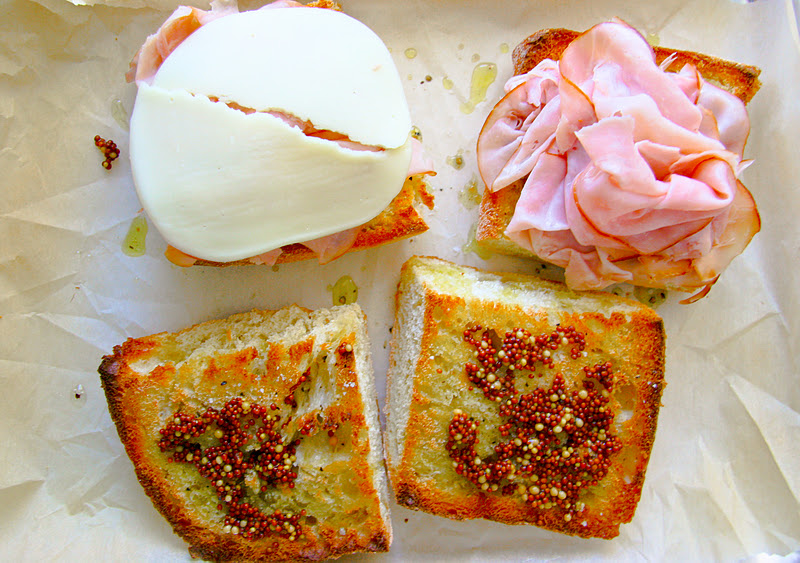 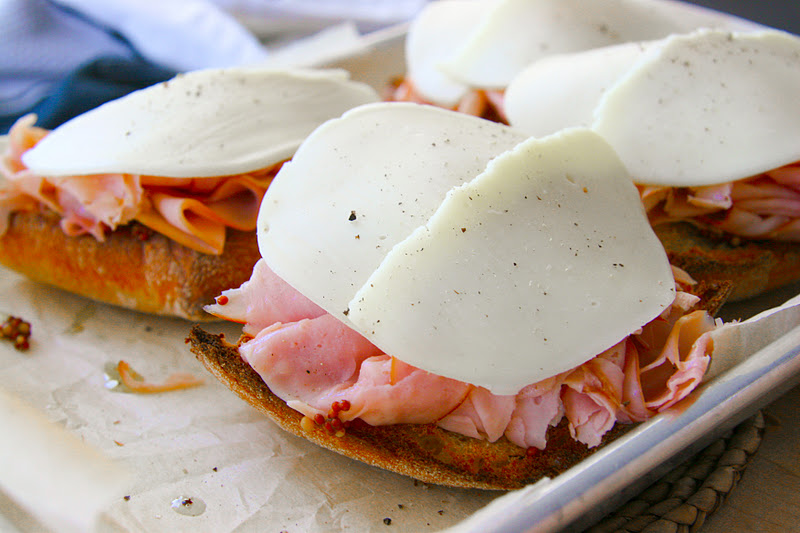 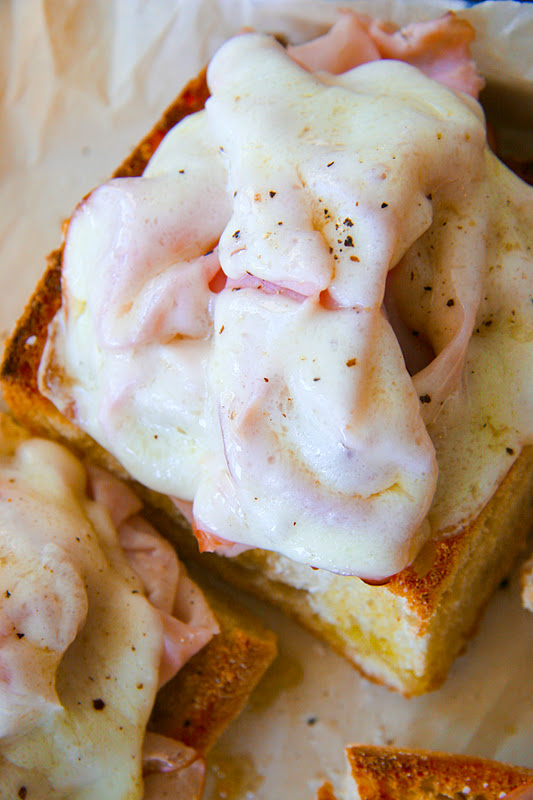 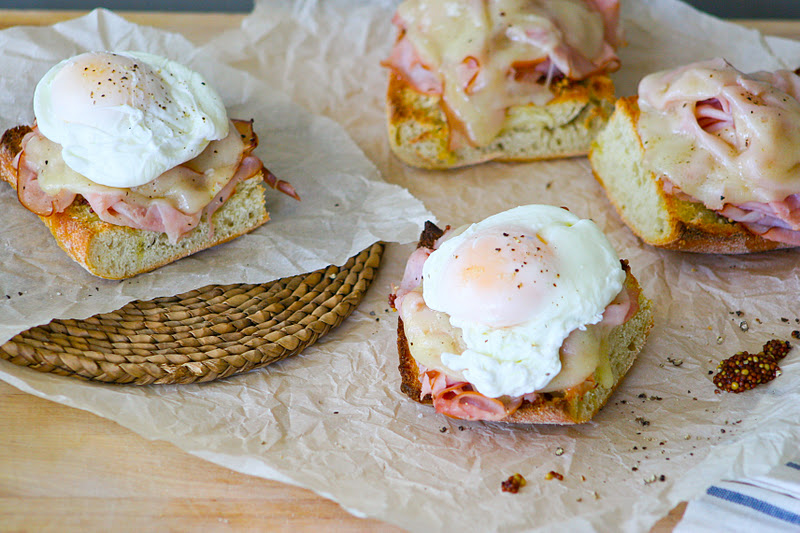 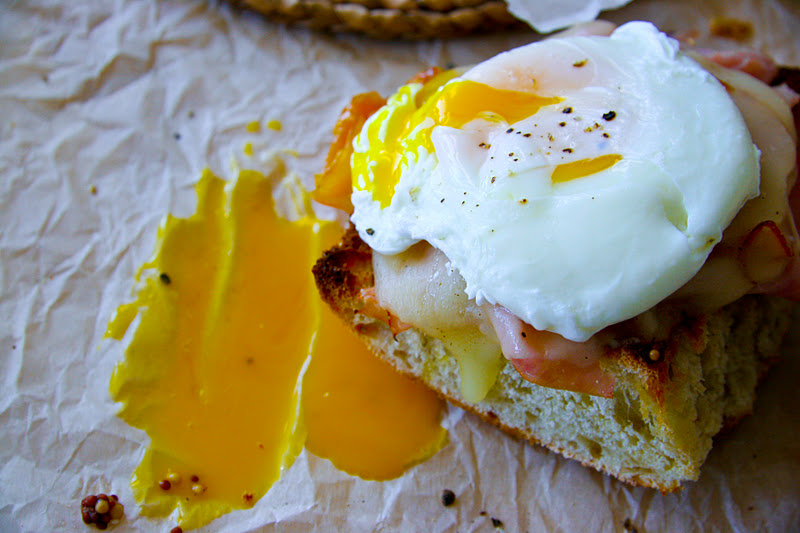 Makes as many servings as you want!

Slice the ciabatta bread to make little open face sandwiches. You decide on how large or small you want them to be. Place them on the baking sheet and drizzle the olive oil over top. Season with salt and freshly ground pepper. Place under the broiler until toasty and golden brown.

Top each piece with a nice smear of grainy mustard. Be generous! Then top with the forest ham and provolone cheese on top of the ham. Season with salt and freshly ground pepper. Place back under the broiler until the cheese melts completely.

Top with a warmed poached egg.