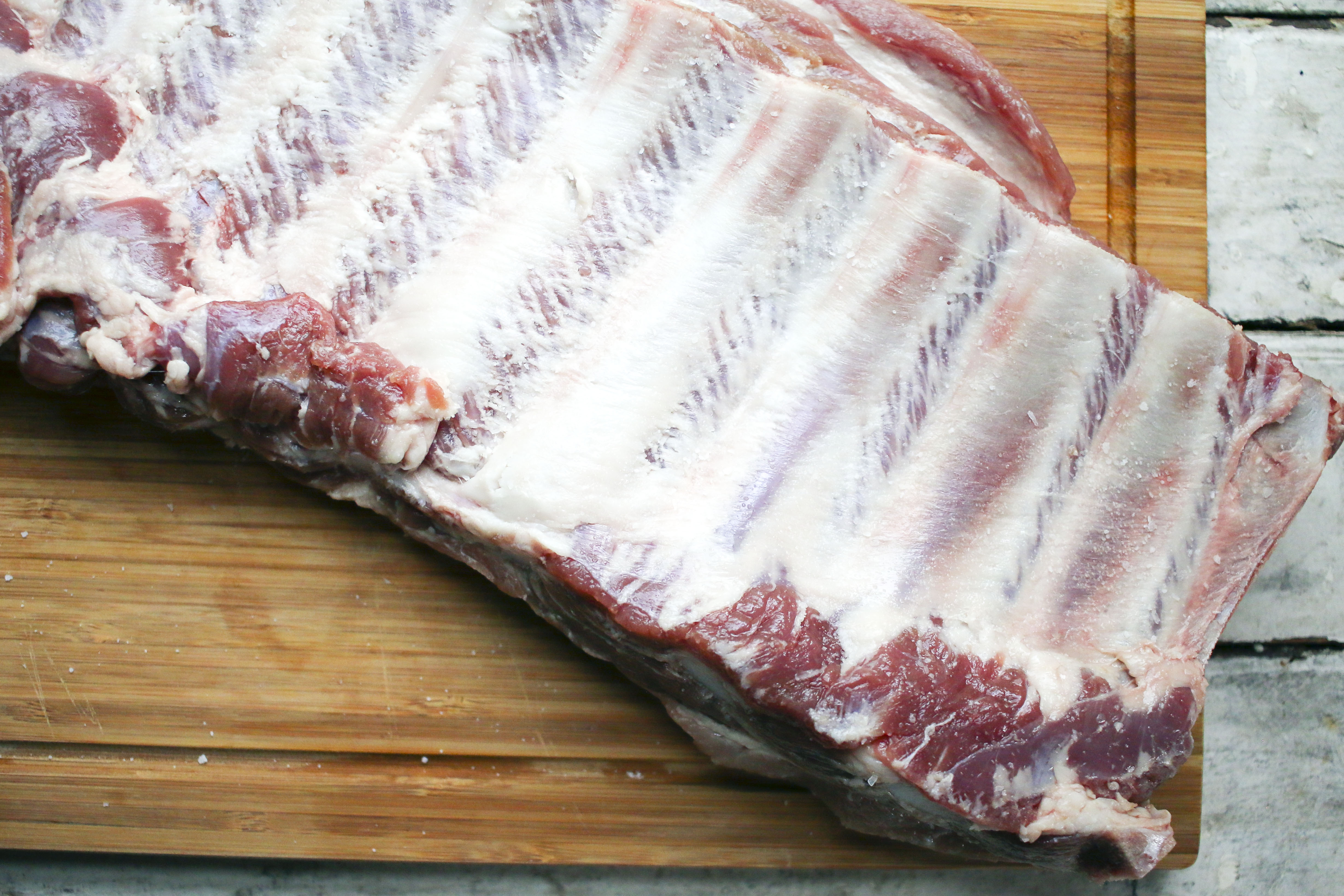 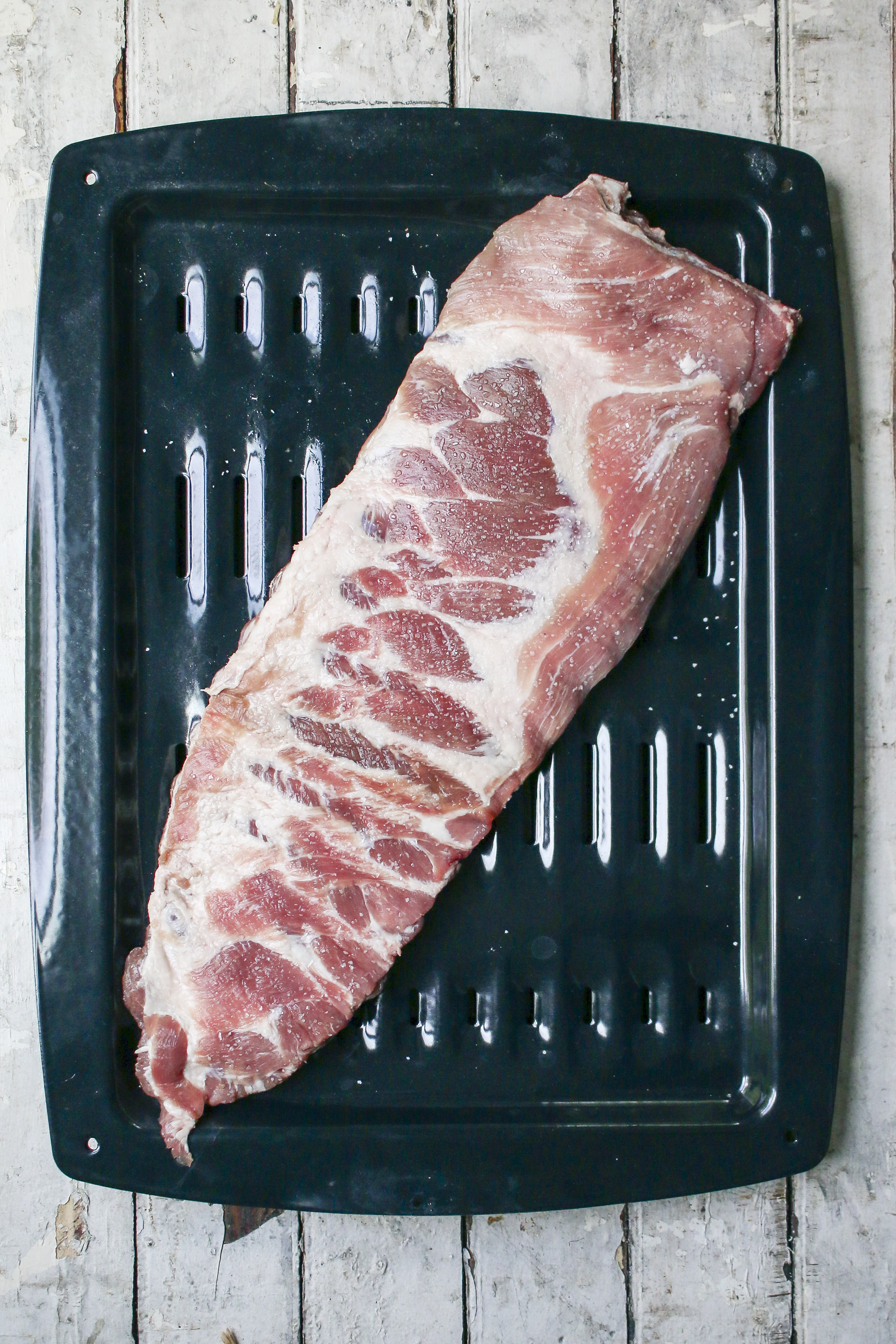 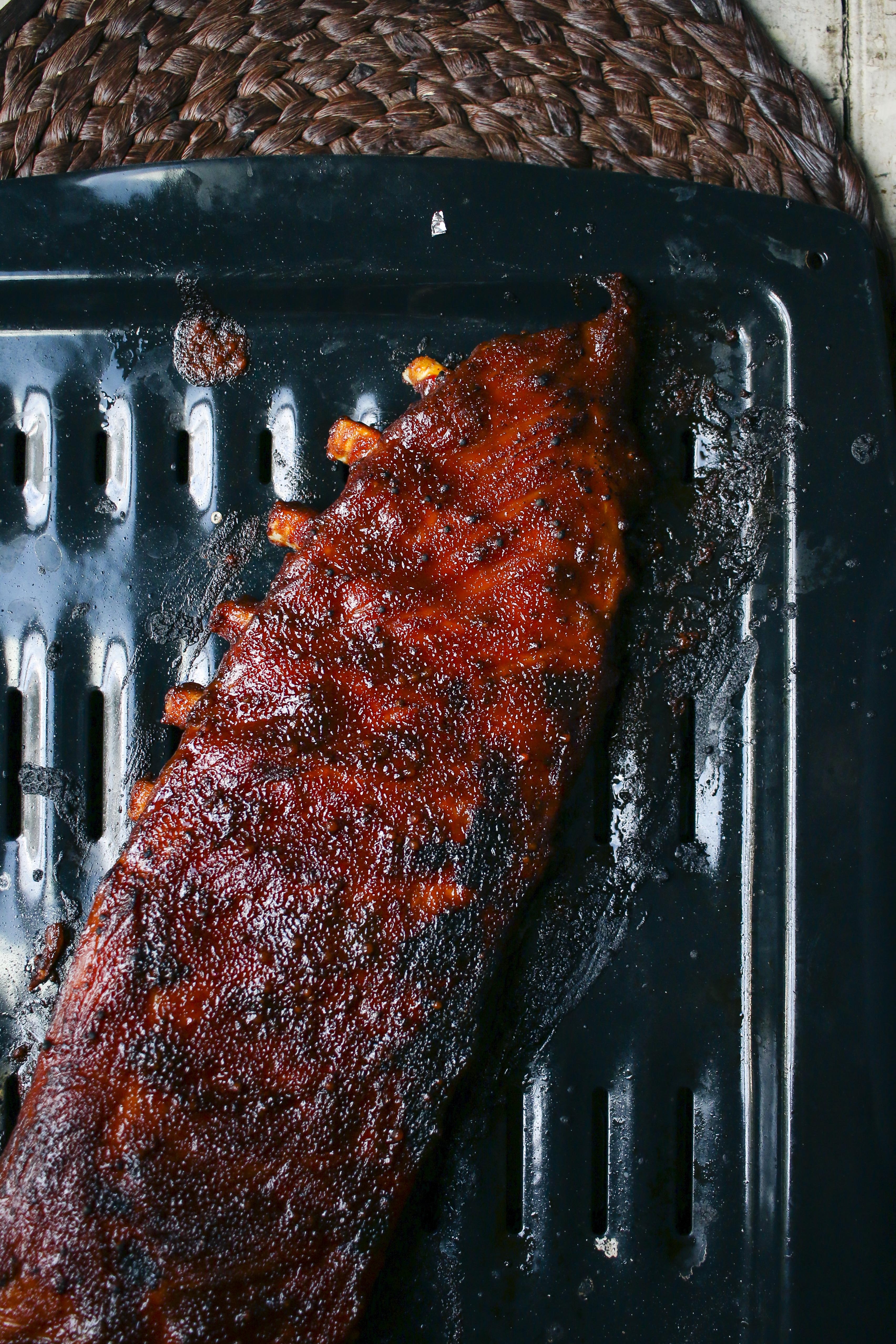 You know that kind of North Carolina style BBQ sauce that makes you cough when you inhale it because of the amount of vinegar in it? Well this is that kind of saaawwce. It’s sweet and sour and tangy and my ultimate BBQ sauce for ribs.

These are literally the easiest ribs to make. You don’t have to be a pit master or even an avid griller to be able to make these. They really are fool proof. Feel free to use any type of BBQ sauce that you like and if you really want to get fancy, you can brine the ribs before roasting them for that extra juicy, punchy flavor. The smoked sea salt used to finish the ribs after they’re slathered and caramelized gives it the illusion of being smoked. It’s a great way to fake smoke.

The only MUST DO is to remove the membrane off the back of the ribs. HERE is a how to if you are unfamiliar with the process. I find that it’s easier to pull it off when you grab the edge with a kitchen towel instead of trying to grip it with your hands. That’ literally the only tip you will need here! 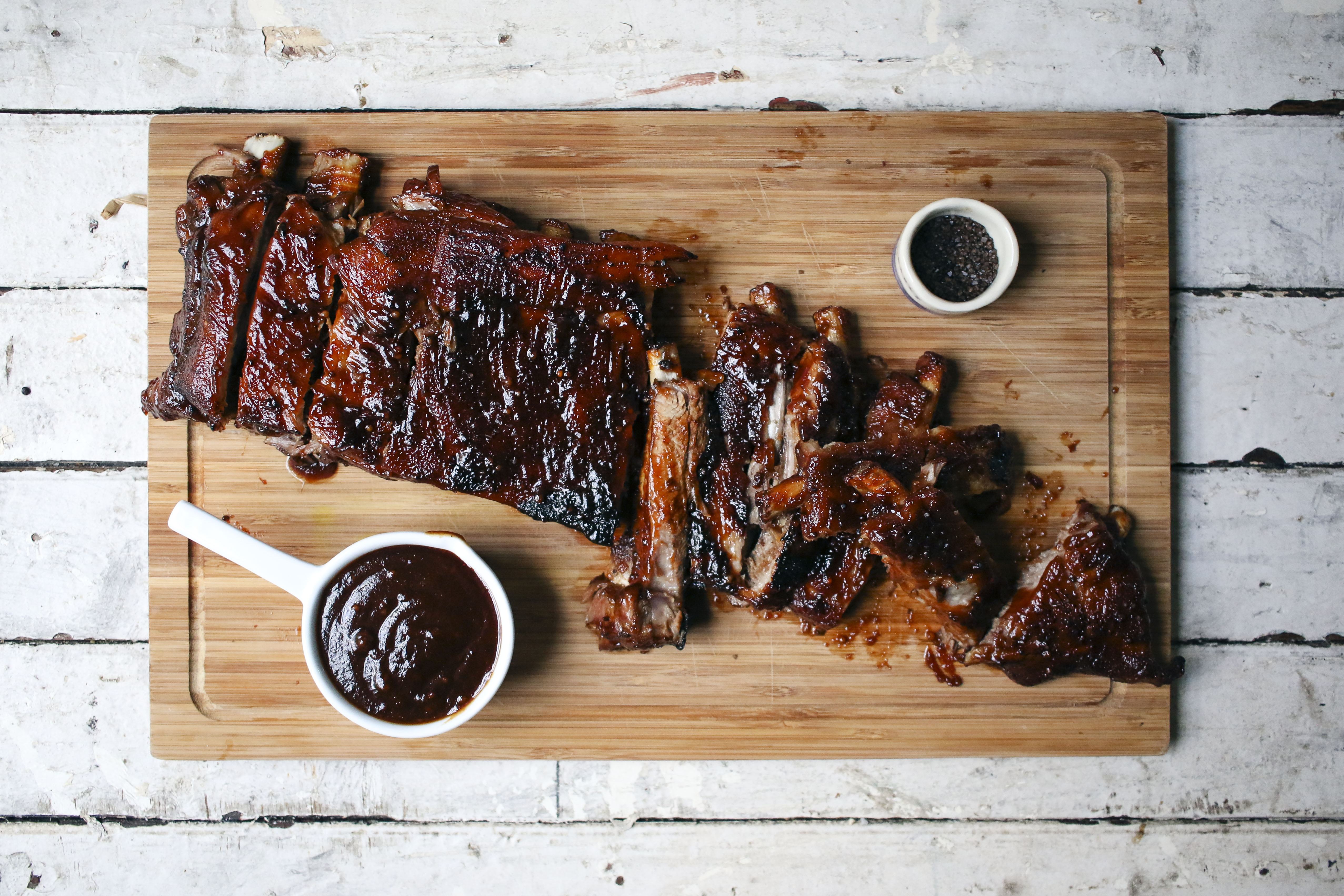 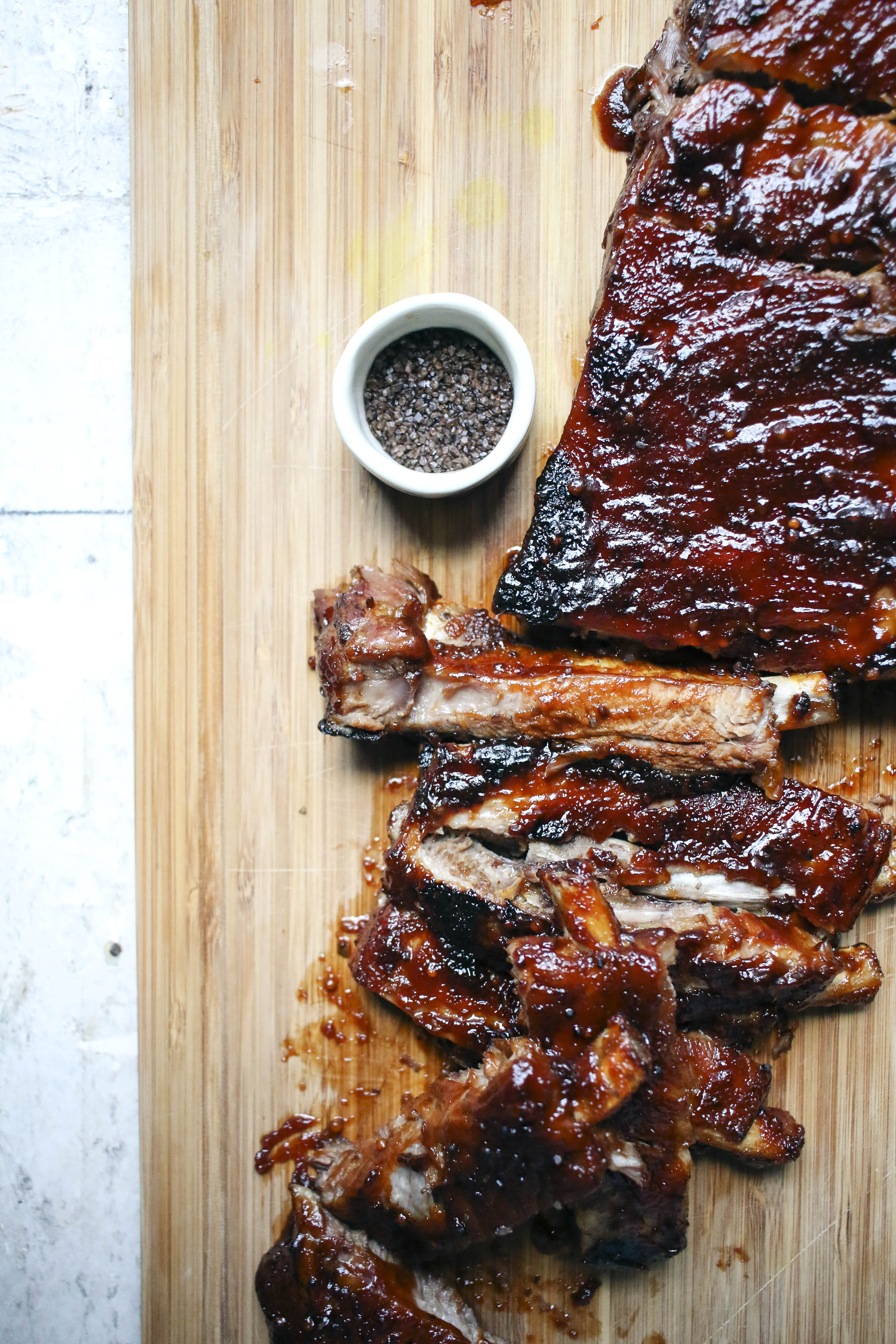 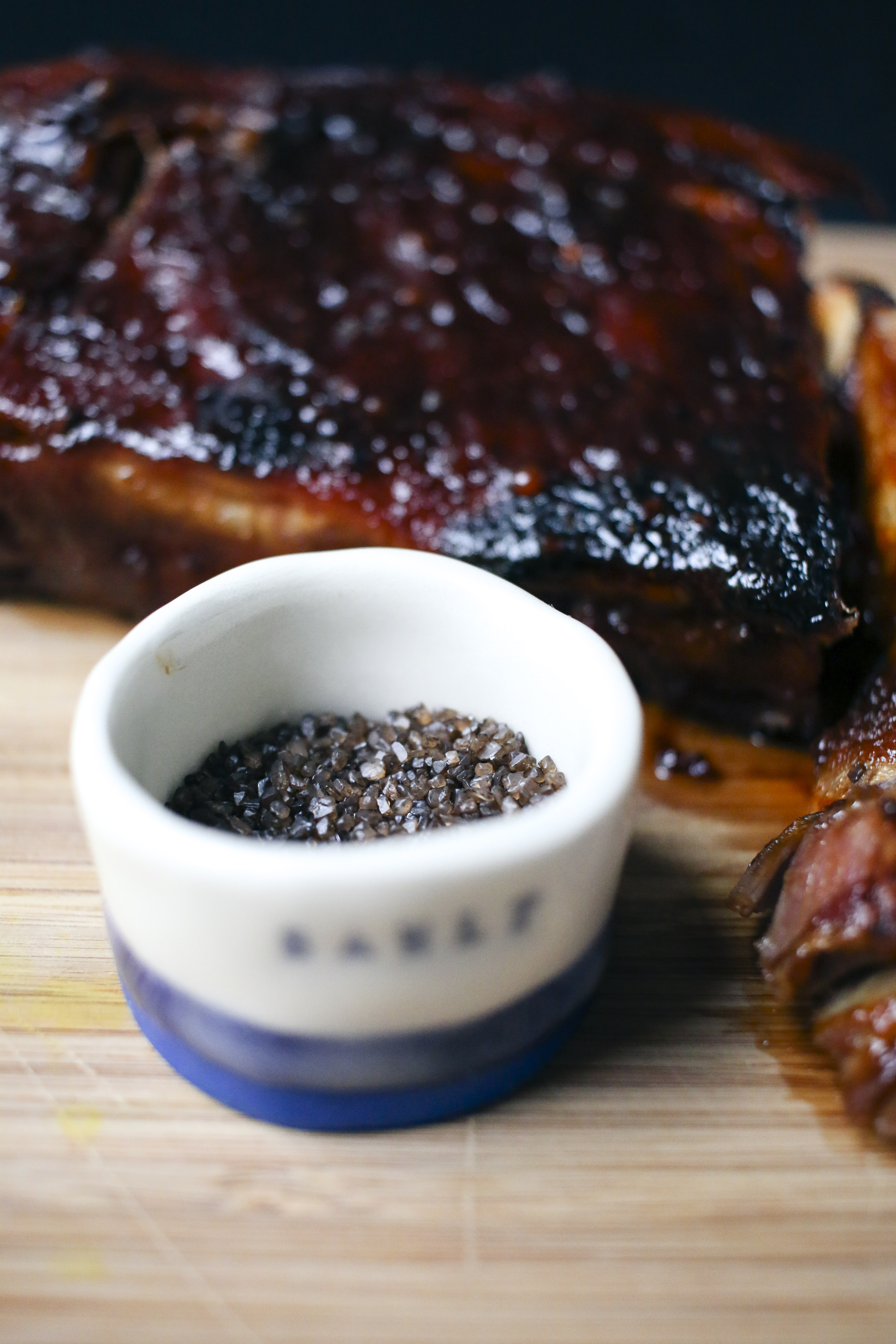 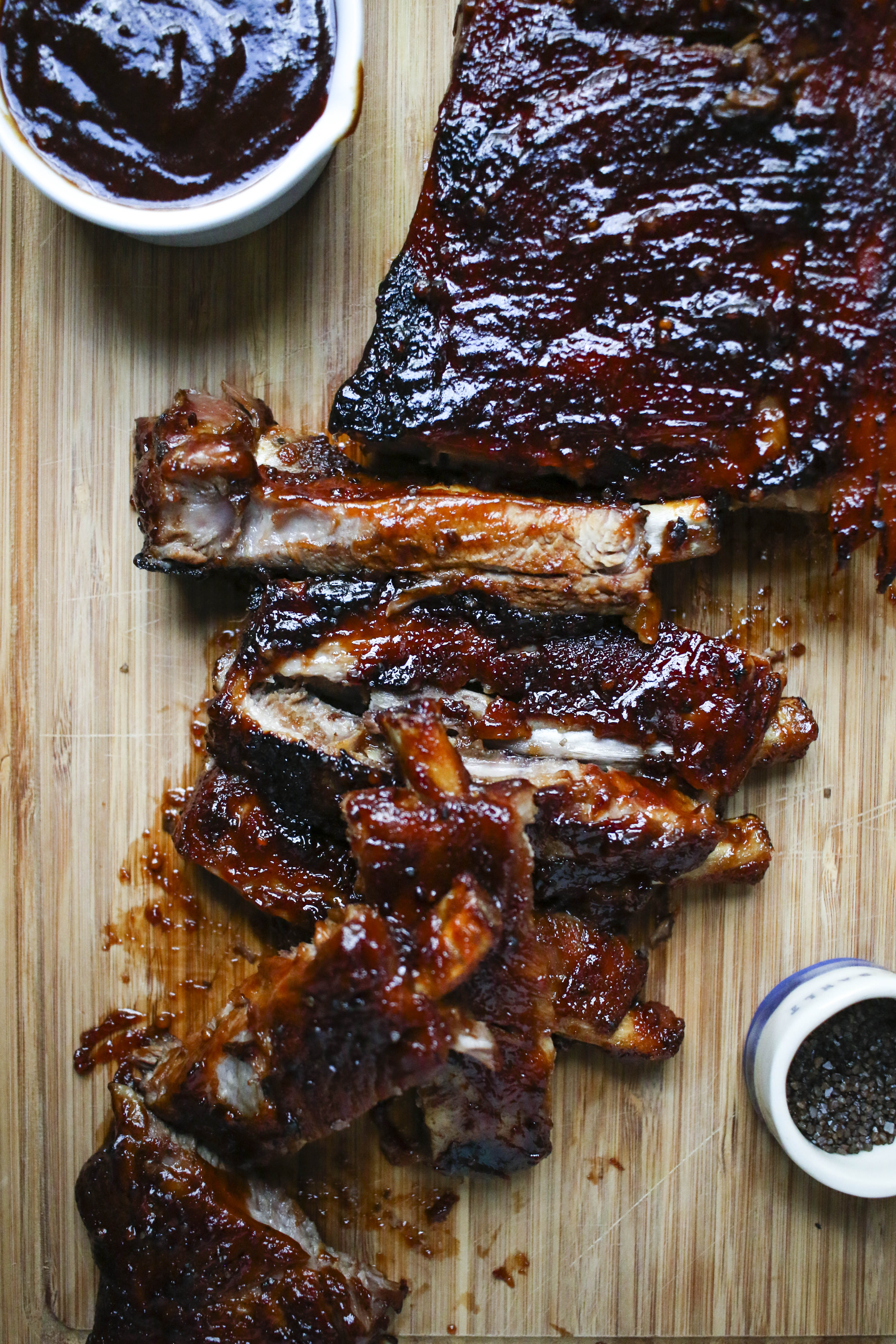 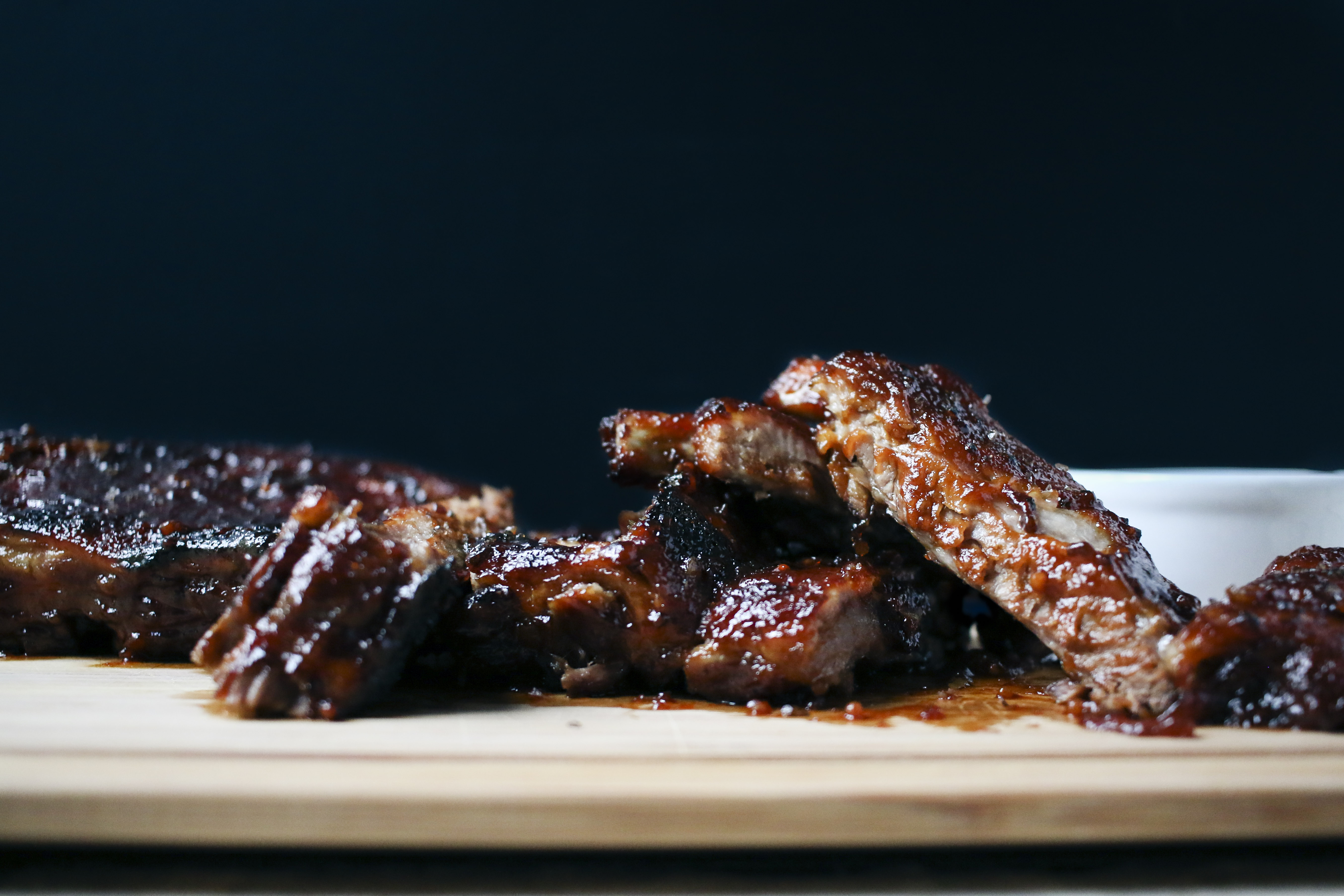 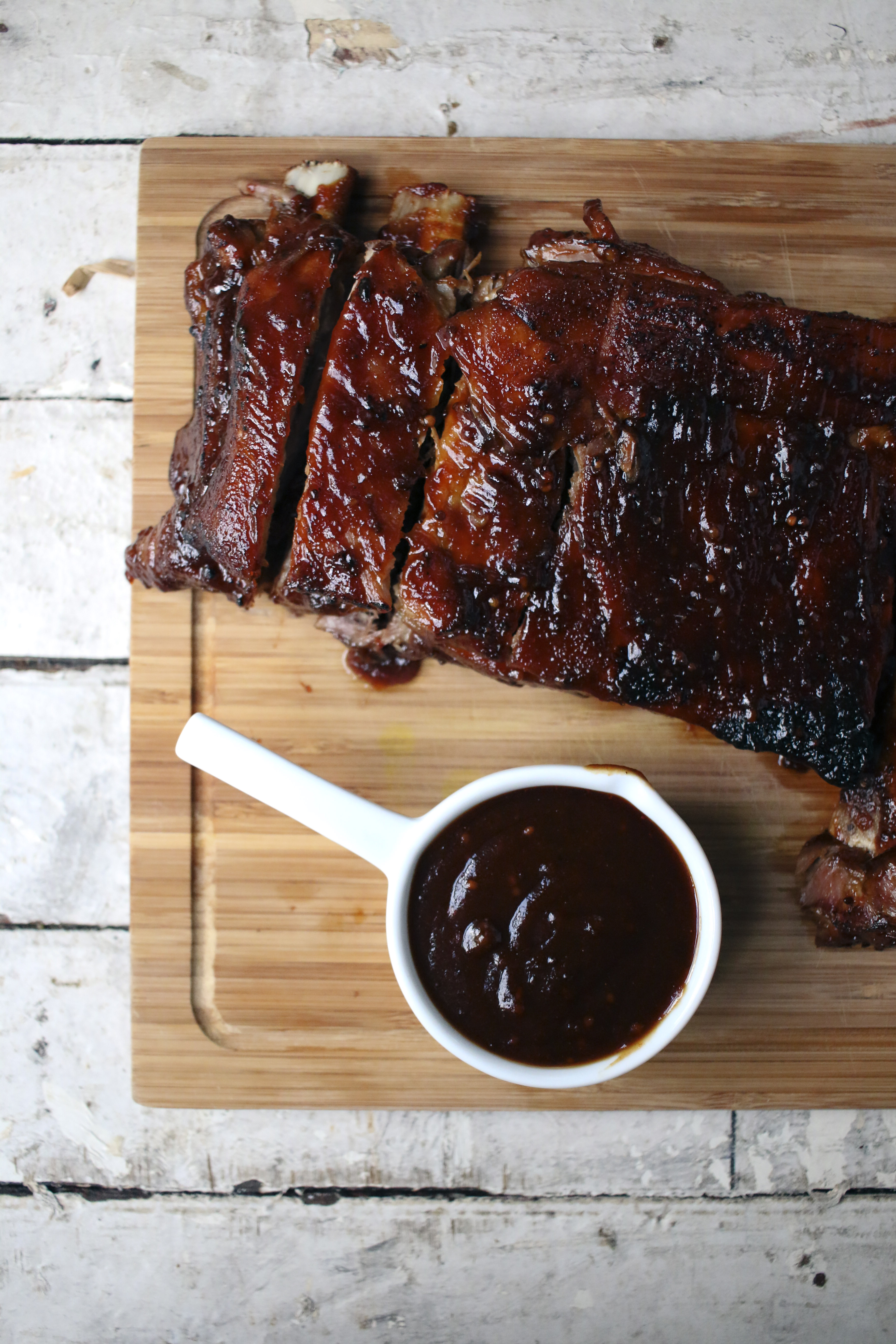 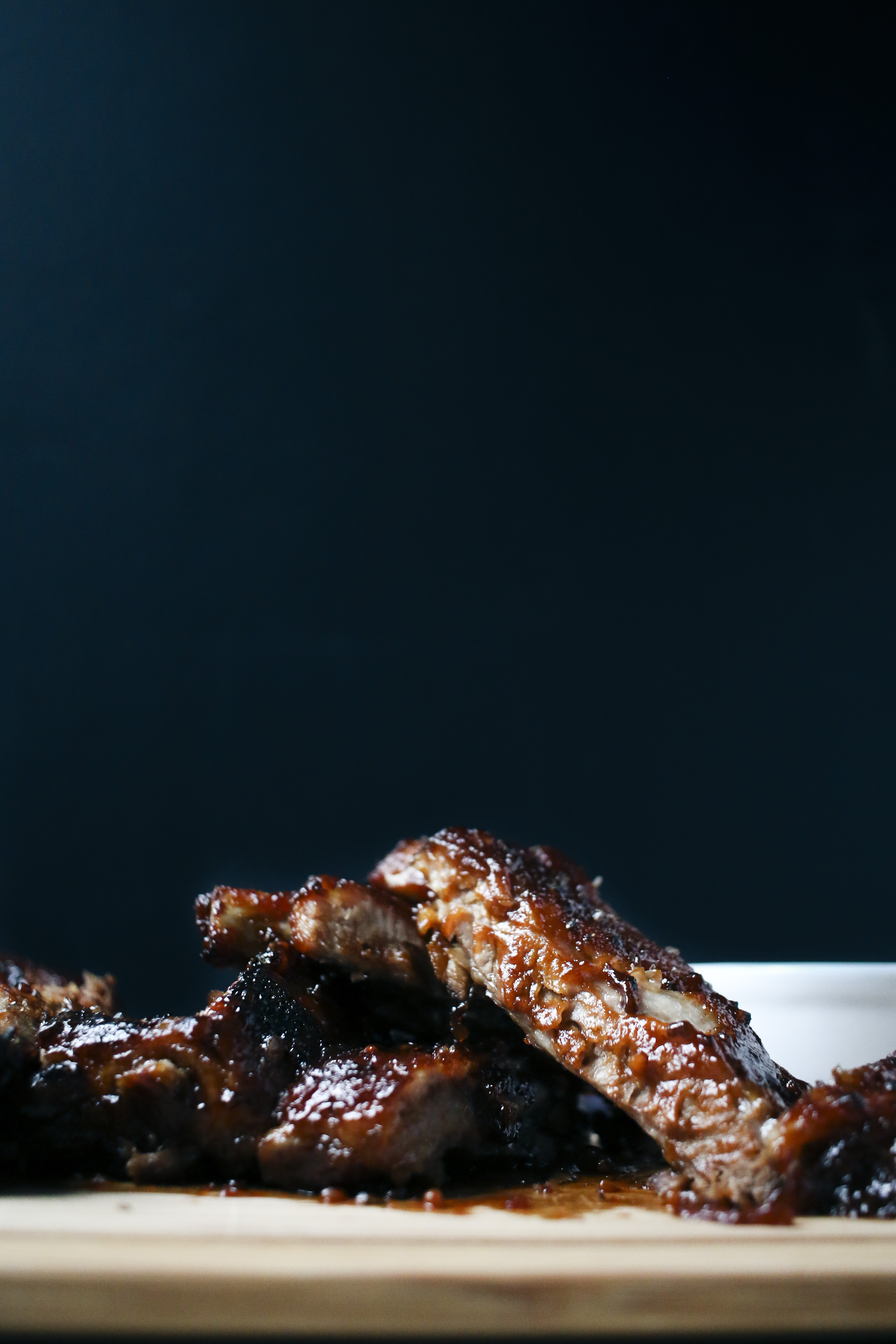 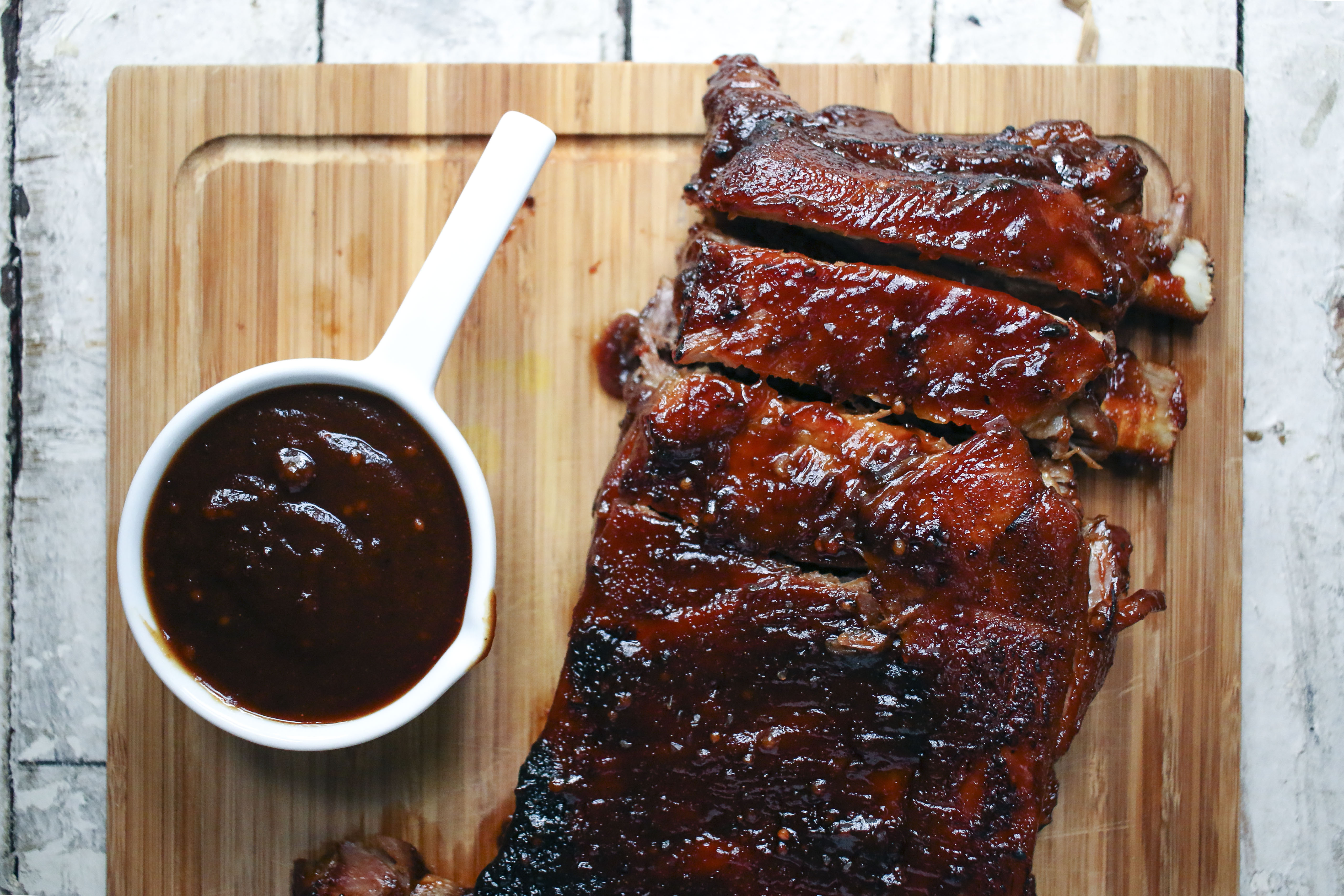 Smoked Sea Salt[/one_third][two_third_last]Pre-heat the oven to 325˚F. You will need a roasting pan with rack inside or a pan with broiler rack. The idea is to steam the ribs over water in the oven. Use whatever you got!

Season the ribs generously with salt on both sides. Place the ribs on the rack with the meaty side up and pour at least one inch of boiling water into the pan below the rack. You do not want the ribs to touch the water. Cover the ribs tightly with tin foil to be sure the steam will not escape. This will ensure the ribs will be super moist. Roast in the oven for 2-2 1/2 hours.

While the ribs are roasting, make the bbq sauce by combining all of the ingredients in a heavy bottomed pot. Bring to a boil over medium-high heat and then turn down to low and simmer for an hour until reduced and thick!

Sprinkle the ribs with smoked sea salt, cut the ribs apart and serve with extra bbq sauce on the side. Enjoy! [/two_third_last]