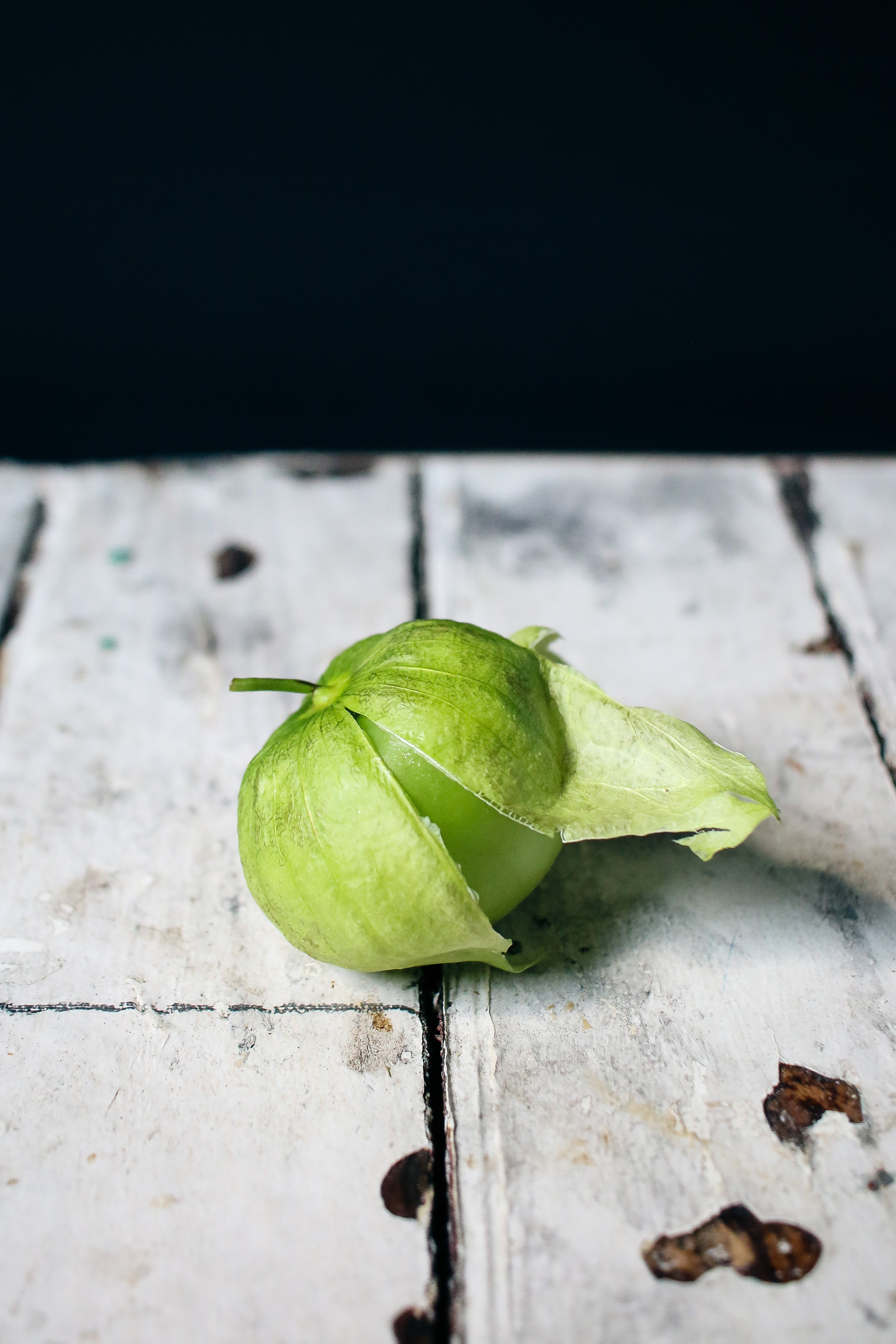 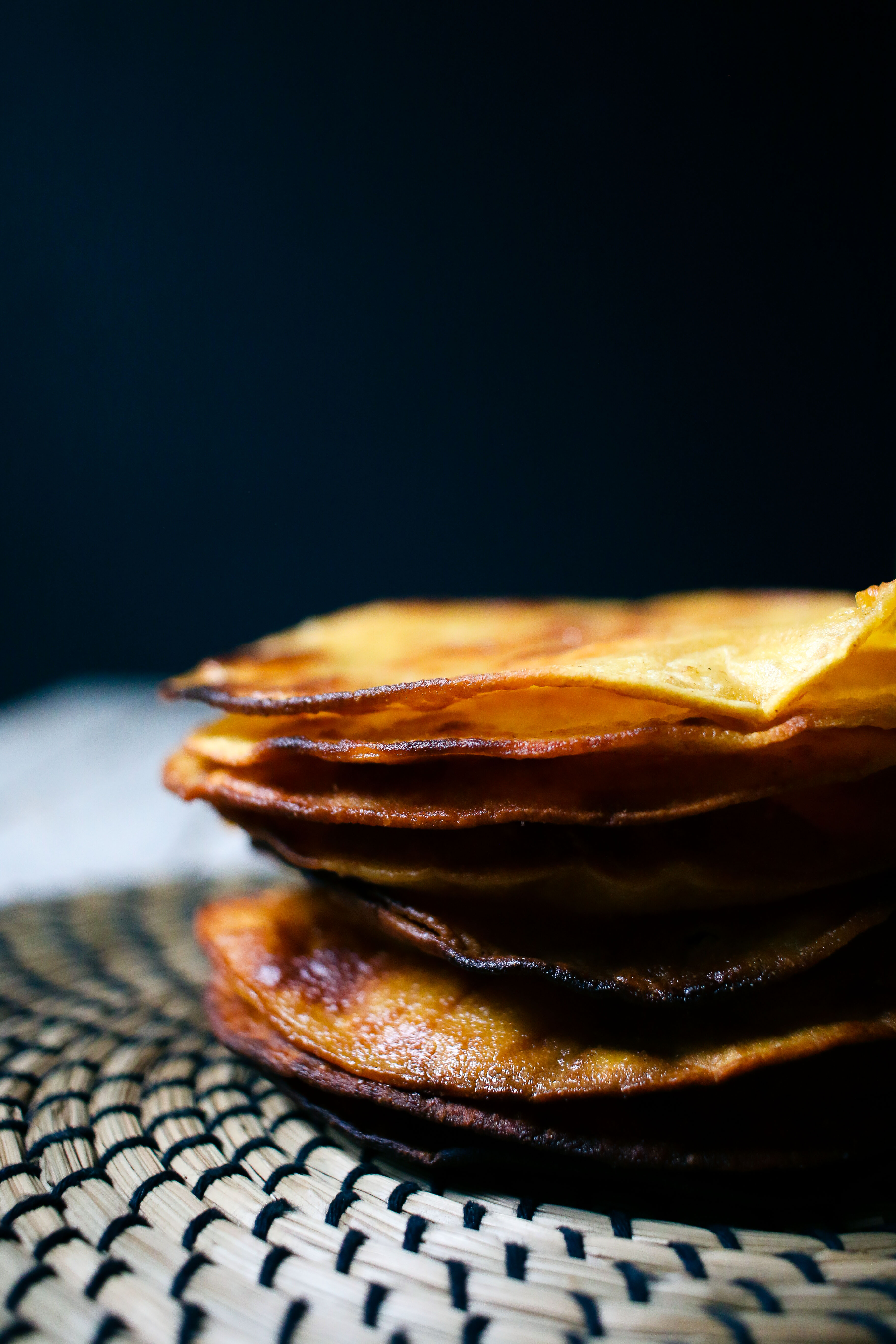 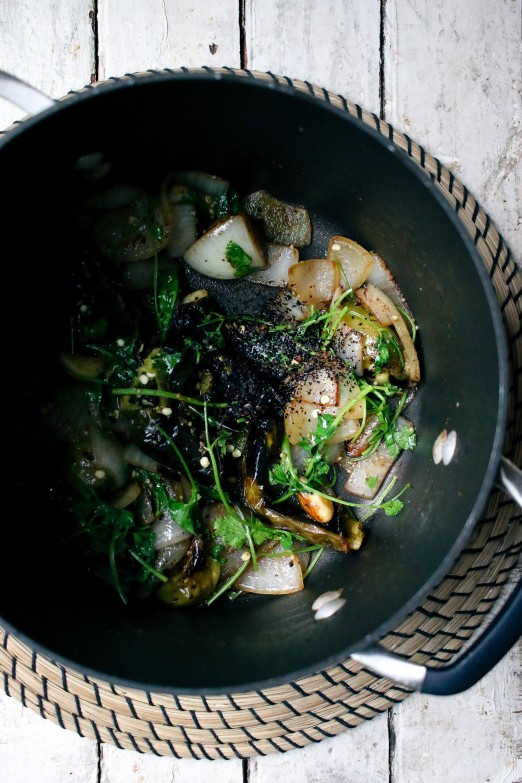 I had a soft serve ice cream cone off of an ice cream truck this past weekend. It’s better than I remember. Plain sugar cone with a large vanilla soft serve swirl that is too white to be naturally flavored. It’s dusk. Imagine 14 adults all over the age of 30 sitting in a park listening to music and playing baggo (aka corn hole). Que ice cream truck music and and an introduction from one Mr. Cox, “Ladies & Gentlemen, ice cream.” At that moment, the truck turns the corner into view. Cheers from the peanut gallery.  We start pooling whatever cash we have in our pockets like 12 year olds. Within 5 minutes we were the happiest “kids” in the park sharing a few dipped cones. We were left with sticky hands and a memory we all filed away along with the other great moments from the weekend of friends, movies, a wedding, karaoke, and Chinese food. Did I mention that this particular ice cream truck’s song was lambada? Yup.

This soup has nothing to do with ice cream. It’s a welcome comfort after the depression I feel after such an incredible weekend. Warming, familiar, and healthier than anything I have been eating. I use Urfa in this recipe which is a smoky, deep reddish purple dried chili flake with very minimal heat. It smells fruity, kind of like raisins. There isn’t a great substitute for Urfa. I recommend you grab some HERE

. Otherwise you can substitute it with a bit of sweet smoked paprika or Aleppo chili flakes

. Urfa can be used when you’re looking for a hint of smokiness and earthy flavor. I even recommend sprinkling some on a salad or on top of hummus. It’s worth having in your pantry! 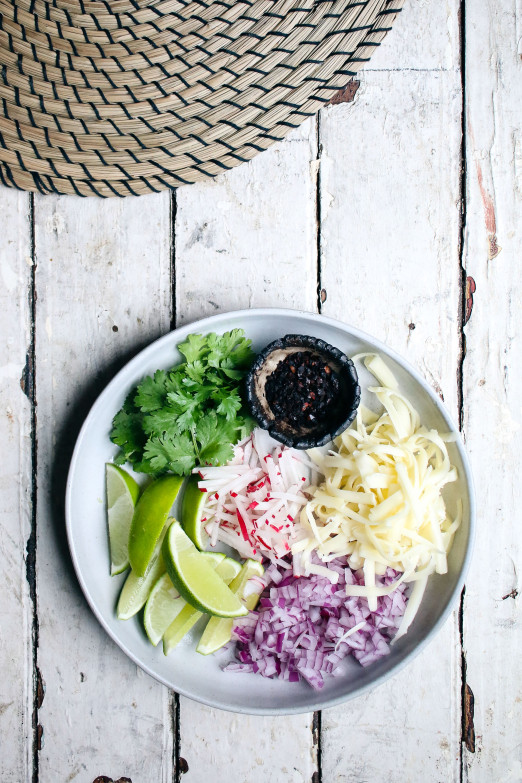 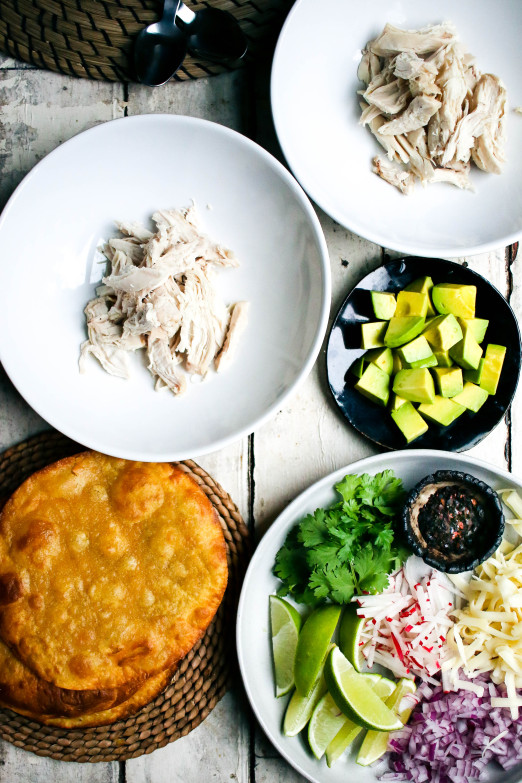 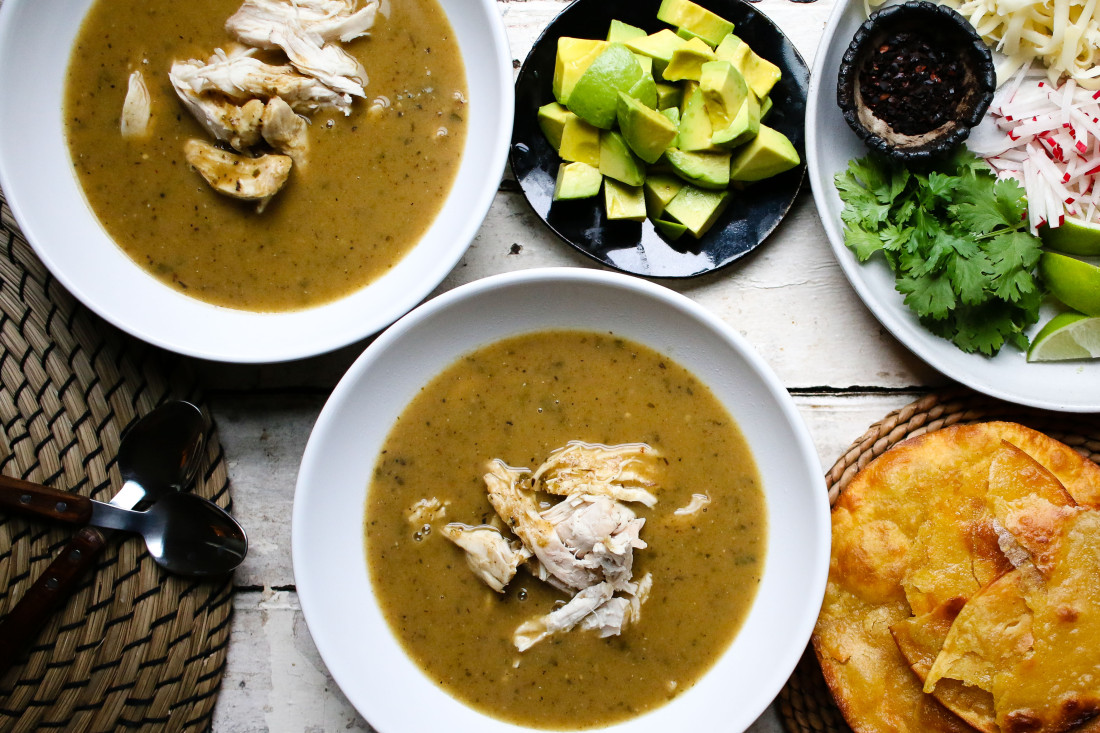 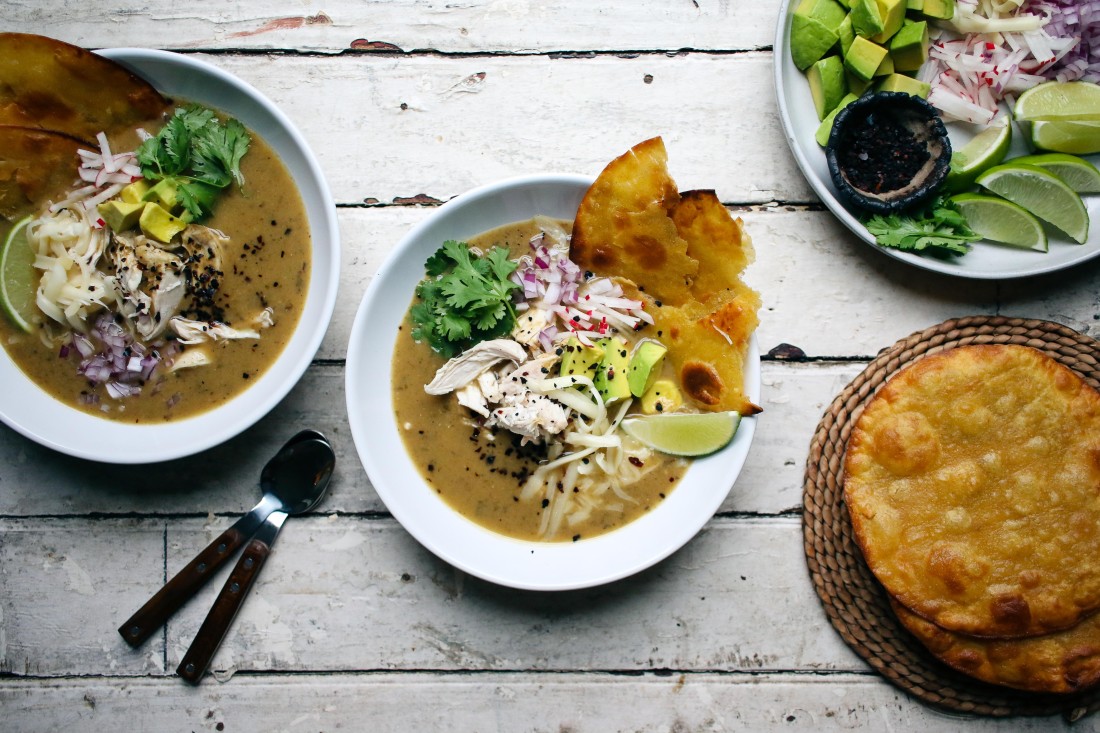 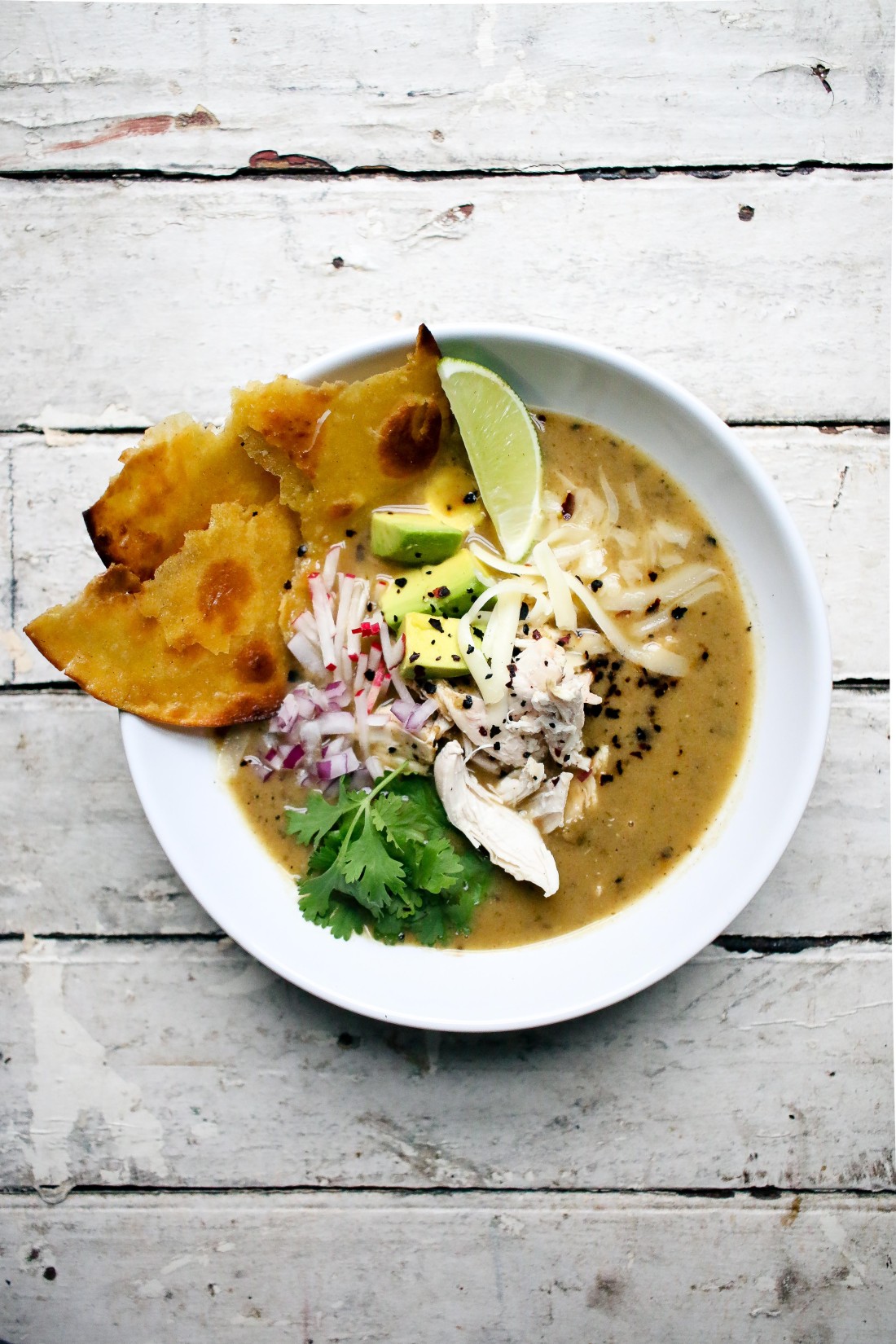 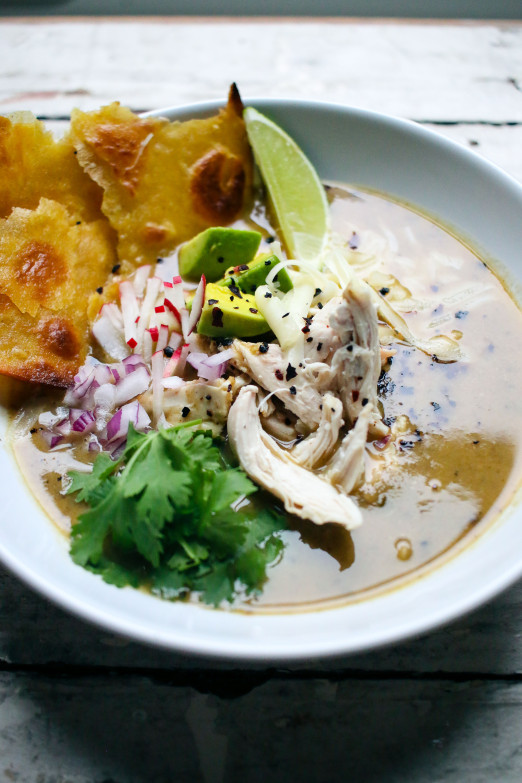 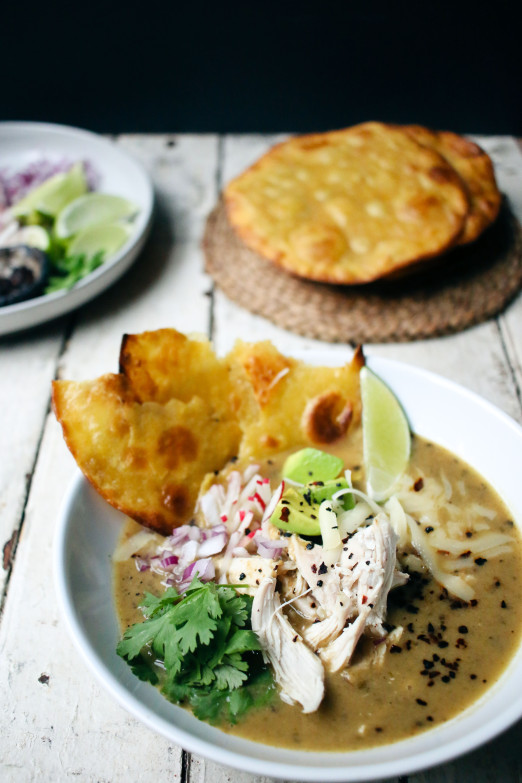 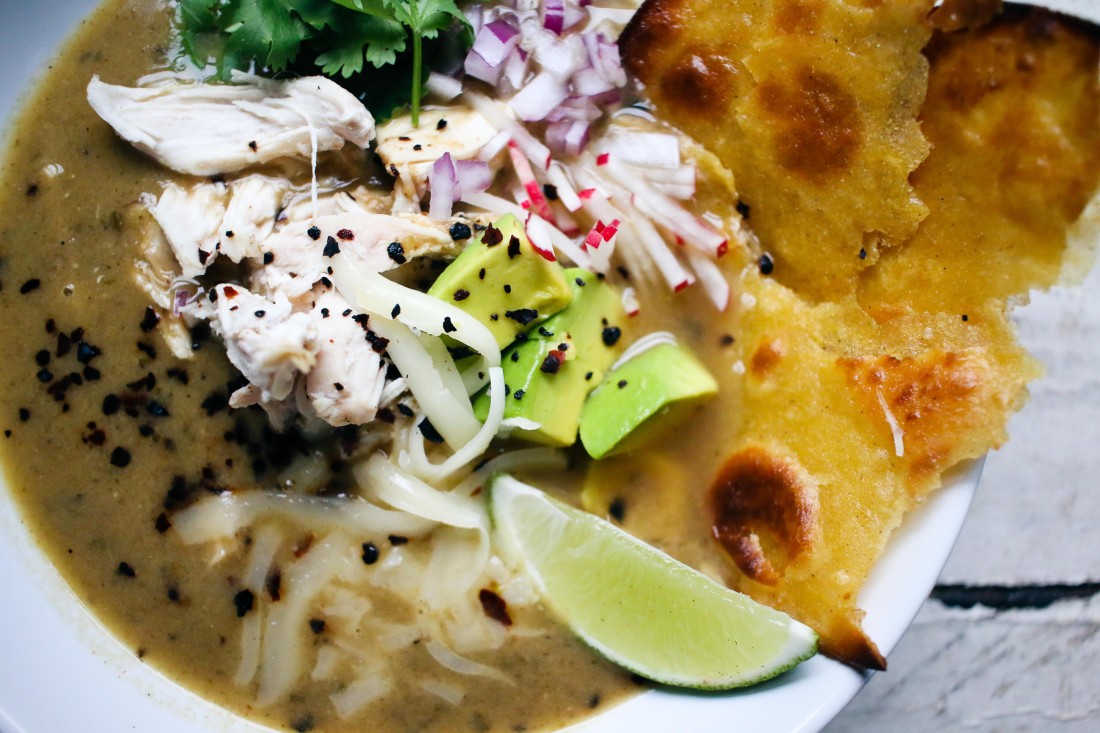 WITH URFA AND ALL THE FIXINGS

avocado, cut into 1/2″ pieces
red onion, diced finely
shredded monterey jack cheese
radish, julienne
cilantro
urfa
slices of lime[/one_third][two_third_last padding=”0 0px 0 0px”]Heat the oil over medium-high heat in a large pot. Season the chicken breast generously with salt and pepper on both sides. Sear the chicken, skin side down first, until golden brown and releases from the pot easily. About 4 minutes per side. Add in the chicken stock and bring to a boil. Once the stock has boiled, turn the heat down to low and cover. Simmer for 20-25 minutes until the chicken is cooked through. Remove the chicken from the stock and place it on a plate, cover with foil and allow to cool.

Heat the broiler to high. Place the tomatillos, long hot green pepper and poblano pepper on a sheet pan at the top third of the oven. Broil for 8-10 minutes to lightly char. Make sure to keep an eye on it and rotate the tomatillos and peppers as they roast to evenly char. Remove them from the oven and allow to cool slightly. Cut or pull off the stems from the peppers.

In a separate large pot, heat the oil over medium heat. Add the onions and garlic. You want to brown the onions slightly to develop the flavor. Cook and stir for 6-7 minutes. Add the salt, cumin, coriander, oregano, urfa, cilantro, tomatillos and peppers to the pot. Cook and stir for another 3-4 minutes. Add in the stock that the chicken breast had boiled in. Bring the soup to a boil, cover and simmer for 20 minutes.

While the soup simmers, fry the tortillas by heating 1/3″ of canola oil in a small fry pan over medium heat. Once the oil is hot enough, fry each tortilla for 30-45 seconds per side until golden brown and crispy. Drain the tortillas on a drying rack to keep them crispy and sprinkle with salt as soon as they are removed from the oil. Repeat with all 8 tortillas adding more oil to the pan as needed.

Shred the cooled chicken into large pieces and discard the skin and bones. Keep covered so the chicken does not dry out.

Crumble 3 of the fried tortillas into soup then turn the heat off and allow to cool for 10 minutes. Purée the soup with an immersion blender, or stand blender, until fairly smooth. Return the soup to a light simmer for 5 minutes stirring often. Taste the soup for seasoning and adjust with salt.

To serve, pile a good amount of shredded chicken in each bowl, spoon the soup into the bowl around the chicken, serve with the avocado, red onion, shredded cheese, radish, cilantro, urfa, fried tortillas and a good squeeze of lime. Enjoy![/two_third_last]