Is it french? Is it Middle Eastern? Is it delicious? Is it easy? Can you (kind of) make it ahead? Will you like it? Are you obsessed with Shakshuka yet? Yes. To all the things. Plenty of times have I had Oeufs en Cocotte at the local breakfast spot I lived by in New York. Petite Abeille served a mean Oeufs en Cocotte filled with goat cheese, bacon, gruyere, and slices of tomato. It would come out piping hot, and as if I never learned, I would always burn my tongue. I would get it, not only because it would come with half a loaf of bread, but because it reminded me so much of Shakshuka. I know, it’s nothing like it really but the baked/poached style eggs that beg for a carb to be dipped into the runny yolk … it just has the same mechanics I guess.

Sooooo, they are now one in the same. Shakshuka en Cocotte. The base of the Shakshuka is a matboucha; roasted peppers stewed down with tomatoes and grated eggplant. It’s normally just eaten as a dip. Growing up my mom would make matboucha every Friday for dinner. Whatever was left over was made into Saturday morning’s Shakshuka. This made brunch the fasted meal ever. Throw it in a pan and drop some eggs in. Done. Brunch. Here I place the matboucha into a vessel, in this case one of my 78 mason jars, drop an egg on top with some feta cheese and bake it in a water bath as you would do with any Oeufs en Cocotte recipe. The matboucha can be made ahead of time and kept in the fridge. The longer that baby sits the tastier it will become. The other wonderful thing about this is that you can make a bunch of them at the same time. Having 10 people over for brunch? No problem, bud. Why do I sound like Ron Popeil right now? 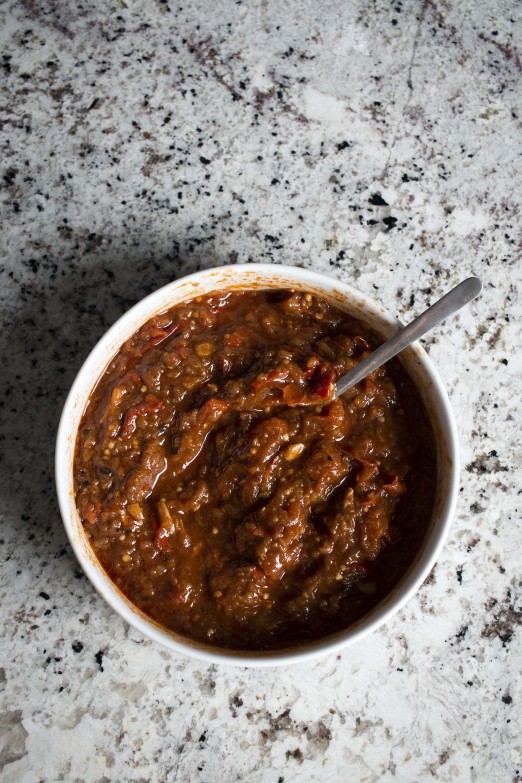 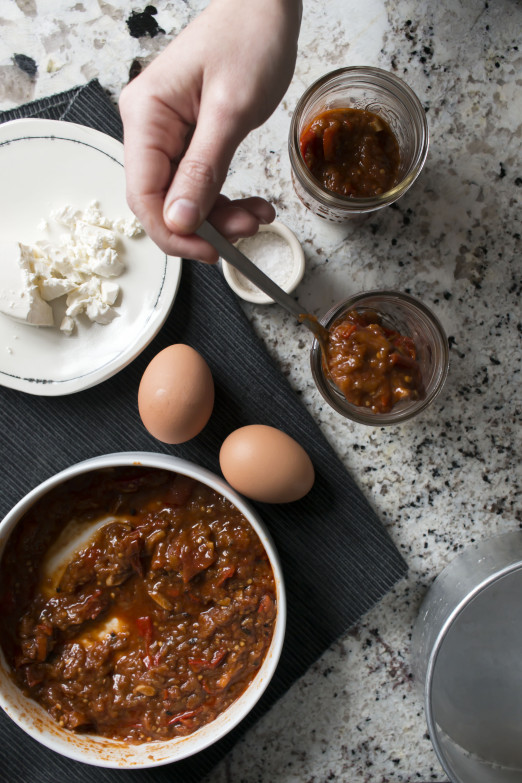 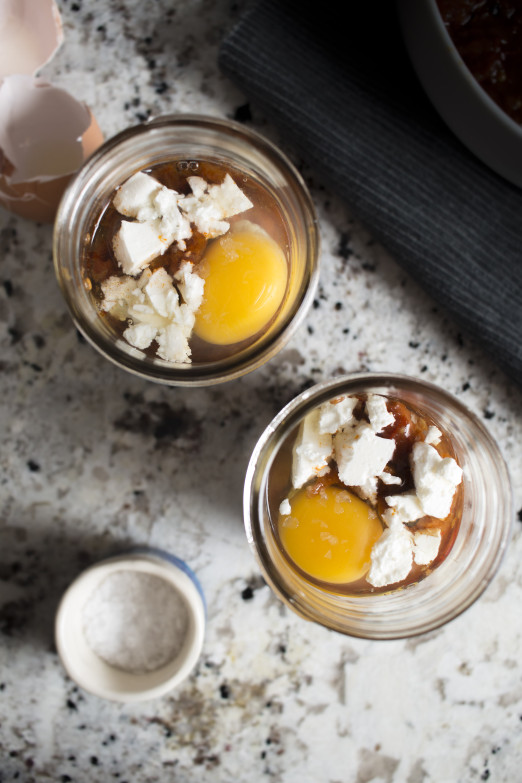 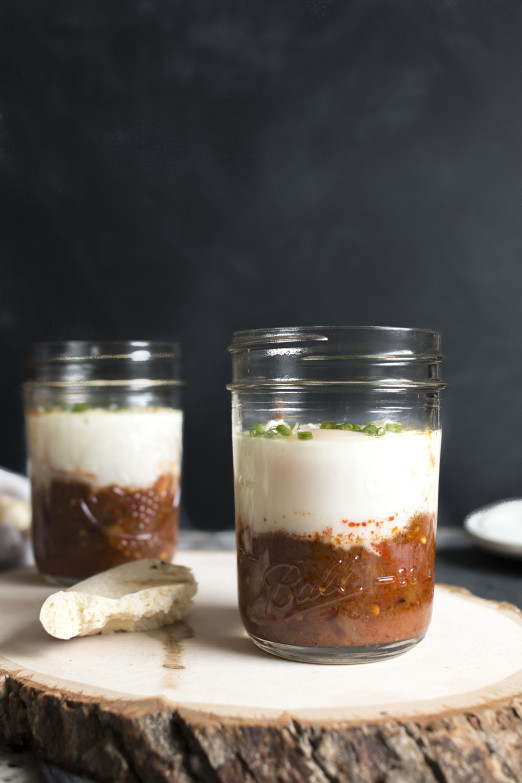 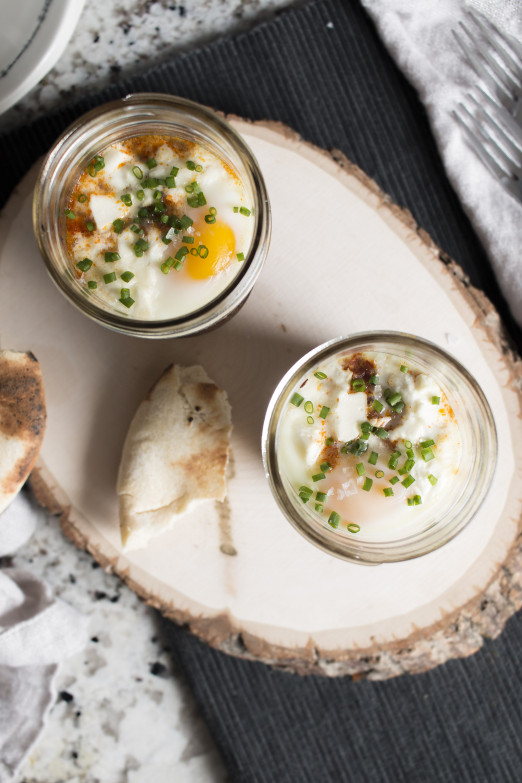 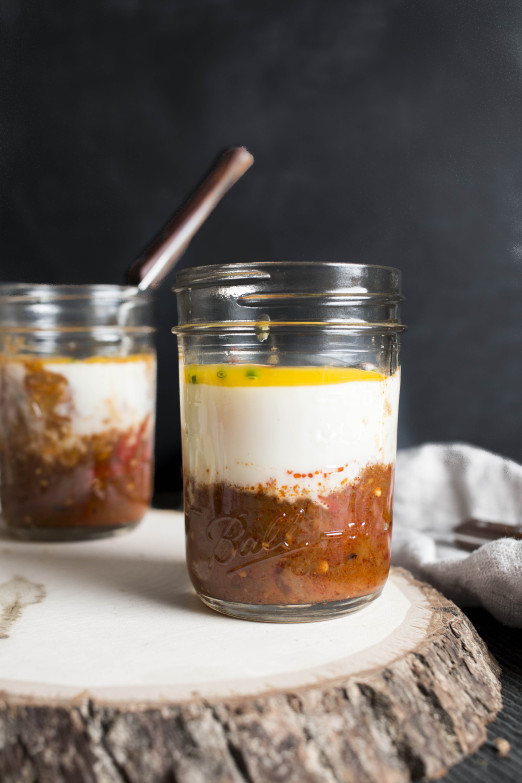 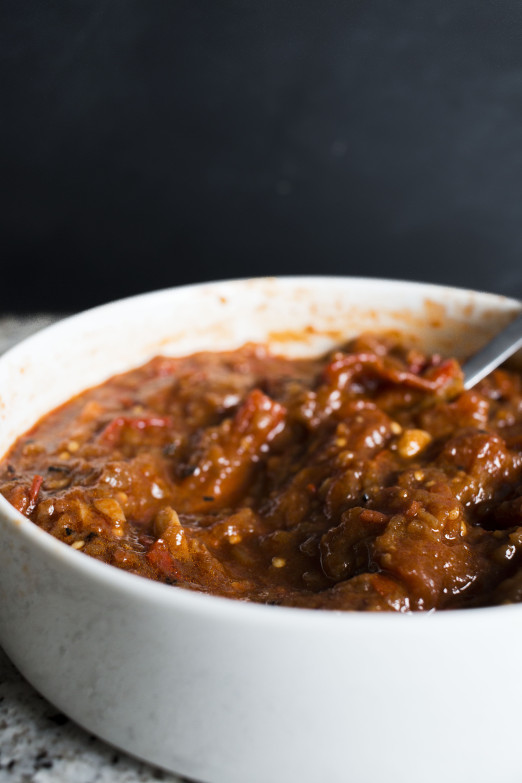 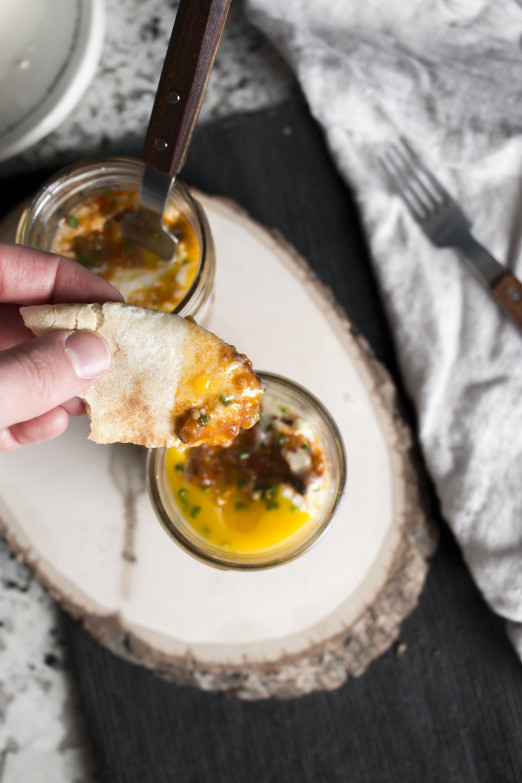 Heat the oil in a large skillet or sauté pan with lid over medium heat (non-stick is best). Add the garlic and cook for 1 minute until fragrant. Add the sweet and hot paprika and continue to cook for about 30 seconds to release the aroma of the spices. Add the tomatoes, chopped hot pepper, sliced bell pepper, and the grated eggplant. Season with salt and white pepper. Cover and slowly bring up to a simmer. Once it does simmer, turn the heat down to low. Stew slowly for 40 minutes, stirring every 8-10 minutes. Taste for seasoning and adjust with salt. Let cool and store in the fridge for up to 4 days. I like to let the matboucha sit for at least 12 hours before using it for a shakshuka.

SHAKSHUKA EN COCOTTE
Pre-heat the oven to 375˚F. Spray or butter the inside of 6 small mason jars or ramekins. Bring some water up to a boil for the water bath. Line a baking pan or cake pan with tall sides with a clean kitchen towel. This will make sure the jars or ramekins will not move around.

Spoon about 1/3 cup of matboucha into the bottom of each jars. Crack an egg into each one on top of the matboucha. Crumble some feta cheese over top and season with a bit of salt. Place the jars into the baking pan and pour enough boiling water in to reach at least half way up the sides of the jars. Bake for 15-18 minutes until the whites of the eggs are set and the yolk is still runny. Garnish with chopped chives and serve with pita or bread. Enjoy! 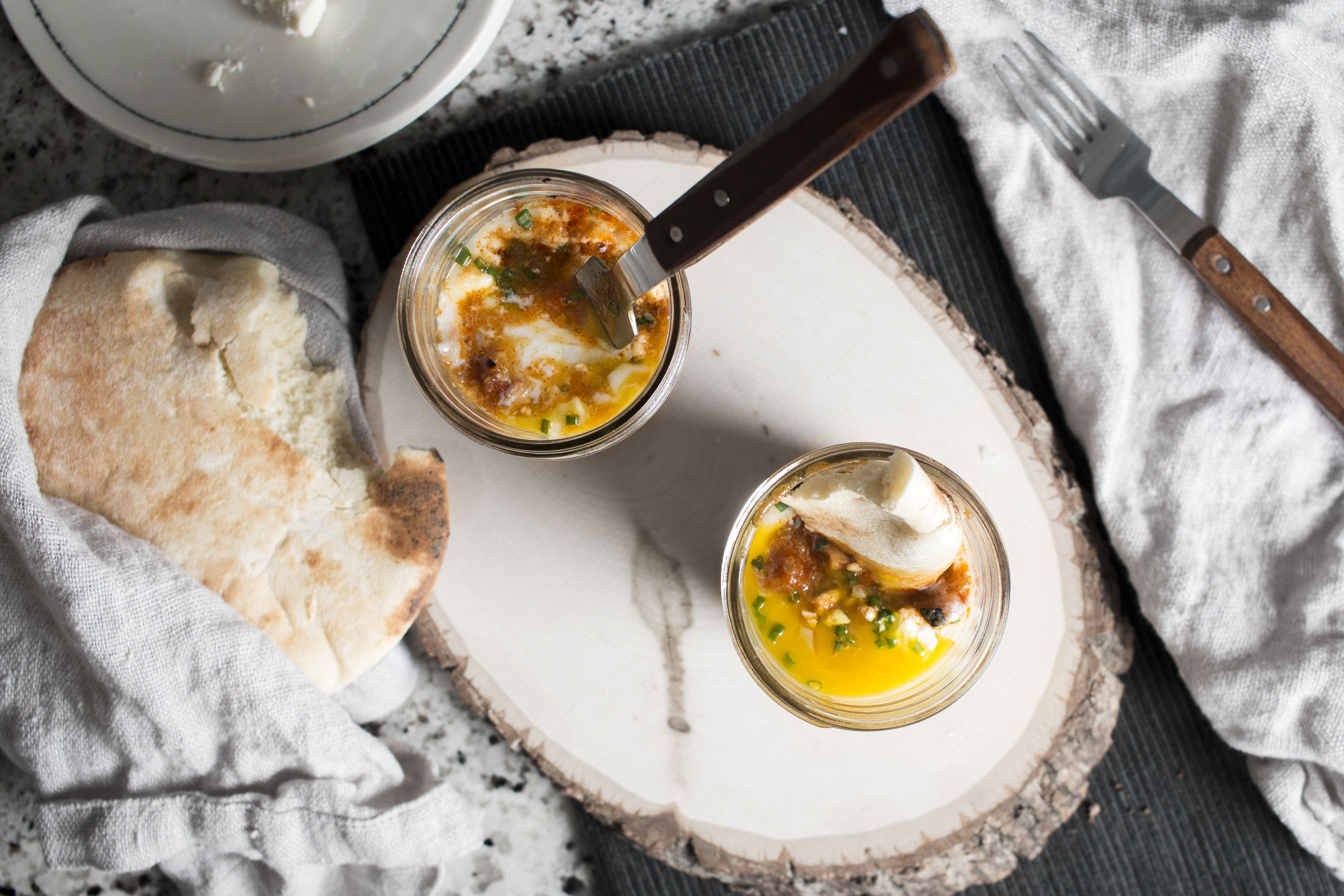